Diana J. Gabaldon ( born January 11, 1952) is an American author, known for the Outlander series of novels. Her books merge multiple genres, featuring elements of historical fiction, romance, mystery, adventure and science fiction/fantasy. A television adaptation of the Outlander novels premiered on Starz in 2014.

Gabaldon was born on January 11, 1952, in Scottsdale, Arizona, United States, the daughter of Jacqueline Sykes and Tony Gabaldon (1931–1998), an Arizona state senator from Flagstaff for sixteen years and later a supervisor of Coconino County. Her father was of Mexican ancestry, and her mother was of English descent.

Gabaldon was the founding editor of Science Software Quarterly in 1984 while employed at the Center for Environmental Studies at Arizona State University. During the mid-1980s, Gabaldon wrote software reviews and technical articles for computer publications, as well as popular-science articles and Disney comics. She was a professor with an expertise in scientific computation at ASU for 12 years before leaving to write full-time. 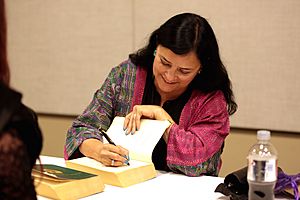 In 1988, Gabaldon decided to write a novel for "practice, just to learn how", and with no intention to show it to anyone. As a research professor, she decided that a historical novel would be easiest to research and write, but she had no background in history and initially no particular time period in mind. Gabaldon happened to see a rerun episode of the Doctor Who science fiction TV series titled "The War Games." One of the Doctor's companions was a Scot from around 1745, a young man about 17 years old named Jamie McCrimmon, who provided the initial inspiration for her main male character, James Fraser, and for her novel's mid-18th century Scotland setting. Gabaldon decided to have "an Englishwoman to play-off all these kilted Scotsmen," but her female character "took over the story and began telling it herself, making smart-ass modern remarks about everything."

To explain the character's modern behavior and attitudes, Gabaldon chose to use time travel. Writing the novel at a time "when the World Wide Web didn't exist," she did her research "the old-fashioned way, by herself, through books." Later, Gabaldon posted a short excerpt of her novel on the CompuServe Literary Forum, where author John E. Stith introduced her to literary agent Perry Knowlton. Knowlton represented her based on an unfinished first novel, tentatively titled Cross Stitch. Her first book deal was for a trilogy, the first novel plus two then-unwritten sequels. Her U.S. publishers changed the first book's title to Outlander, but the title remained unchanged in the U.K. According to Gabaldon, her British publishers liked the title Cross Stitch, a play on "a stitch in time"; however, the American publisher said it "sounded too much like embroidery" and wanted a more "adventurous" title. When her second book was finished, Gabaldon resigned her faculty position at Arizona State University to become a full-time author.

As of 2014[update], the Outlander series comprises eight published novels. The ninth installment, Go Tell the Bees That I am Gone, will be published on November 23, 2021. Gabaldon also published The Exile (An Outlander Graphic Novel) in 2010. The Lord John series is a spin-off from the Outlander books, centering on a secondary character from the original series.

Gabaldon lives in Scottsdale, Arizona with her husband Doug Watkins, with whom she has three adult children. Her son, Sam Sykes, is also a fantasy writer.

Gabaldon is a Roman Catholic.

A television adaptation of the Outlander series premiered on Starz in the US on August 9, 2014. Gabaldon made a cameo appearance as Iona MacTavish in the August 2014 episode "The Gathering". Gabaldon is a paid consultant for the show, and wrote the screenplay for the 2016 season 2 episode "Vengeance Is Mine".

In 2010 Gabaldon adapted the first third of Outlander into The Exile: An Outlander Graphic Novel, illustrated by Hoang Nguyen. The same year, a 14-song cycle based on Outlander was released under the title Outlander: The Musical.

All content from Kiddle encyclopedia articles (including the article images and facts) can be freely used under Attribution-ShareAlike license, unless stated otherwise. Cite this article:
Diana Gabaldon Facts for Kids. Kiddle Encyclopedia.