Phoenix Fan Fusion (formerly Phoenix Comicon and Phoenix Comic Fest) is a speculative fiction entertainment and comic book convention held annually in Phoenix, Arizona. It was founded as the Phoenix Cactus Comicon in June 2002, and originally consisted of a one-day six-hour event held in Ahwatukee, Arizona. The convention plays host to comic related panels, programming events, art contests, and autograph signings for all ages. It is a four-day event (Thursday-Sunday) held during the summer at the Phoenix Convention Center in downtown Phoenix. On Thursday evening prior to the official opening of the event, there is a preview for professionals, exhibitors, and select guests pre-registered for all four days.

Originally showcasing comic books, science fiction/fantasy and film/television, and related popular arts, the convention has expanded over the years to include a larger range of pop culture elements, such as horror, anime, manga, animation, toys, collectible card games, video games, webcomics, and fantasy novels. In 2016, the convention set an attendance record of 106,096, and reportedly generates approximately $5 million in revenue for the city of Phoenix. Then-Phoenix Comicon also began to expand programming into the surrounding hotels starting in 2013, including the Hyatt Regency, Marriott Renaissance and Sheraton Phoenix Downtown Hotels. 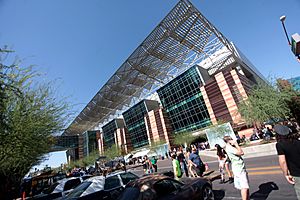 The Phoenix Convention Center has hosted the annual convention since 2010.

The first Phoenix Comicon was held in June 2002 as Phoenix Cactus Comicon. It was a one-day convention for six hours held at a Best Western in Ahwatukee, Arizona. Admission was $3 per person and there were 432 attendees, along with a few local creators and exhibitors. The following three years, the convention was held at the Glendale Civic Center. The size of the convention and the attendance were doubled from the previous year, and the Sunday morning six-hour length of the convention was maintained. The convention began to bring out some guests from out of state including Spider-Man artist Todd Nauck and comic legend Marv Wolfman. The programming was increased to include Q&A's with guests, how-to workshops, and film trailer presentations.

In 2006, the convention was held at the Mesa Convention Center in Mesa, Arizona, for the first time in its history. It also became a two-day convention, with Friday preview night, and had guests such as voice actors Johnny Young Bosche and Greg Ayres. The exhibitor room was dramatically expanded, as was the amount of programming offered. This was the first convention to expand beyond comic books into the greater pop culture community, including Anime, Manga, Sci-Fi, Fantasy and Cosplay. Attendance was over 2,600 people for the weekend. The convention was held in January from 2007 to 2009, at the Mesa Convention Center. Attendance jumped past 3,200. 2007 was considered the conventions first foray into media guests, with Feedback, the winner of "Stan Lee's Who Wants to be a Superhero" attending. In 2009, the event was expanded to 3 days, with a Thursday preview night. It was also announced at the 2009 convention that due to an overwhelming attendance of around 7,000 people for that year, the convention in 2010 will be moving to the Phoenix Convention Center the next year, along with the dates changing to the end of May.

Beginning in 2010 the convention was held on Memorial Day weekend, at the Phoenix Convention Center and Grand Hyatt Hotel in Phoenix. This change was due to the large increase in attendance, and the availability of funds to hold the convention in a larger venue. Bigger names, such as Leonard Nimoy, George Takei, and Stan Lee also attended the convention as special guests. One of the highlights of the 2013 event include the world premiere of "Pilgrim of Eternity", the first full-length episode of the award-winning Star Trek Continues fan film web series and a sequel to "Who Mourns for Adonais?". In 2014, due to a scheduling conflict, the convention was moved to the first week of June as opposed to Memorial Day weekend. The convention also expanded its presence into the South and West buildings of the convention center, as well as nearby hotels including the Hyatt Regency Hotel, Marriott Renaissance Hotel and Sheraton Phoenix Downtown Hotel. The 2015 and 2016 convention took place the weekend after Memorial Day weekend at the Phoenix Convention Center, and further utilized the convention facilities, including expanding to the third level ballroom in order to accommodate a larger amount of attendees for popular media guests.

Beginning in 2017, the convention again took place on Memorial Day weekend at the Phoenix Convention Center, with the same being true through at least 2019.

On May 25, 2017, the first day of the convention, a man was arrested after posting to Facebook his intent to kill police officers, and was found in possession of several firearms and knives. The man believed he was the Punisher, and intended to kill bad police officers, along with actor Jason David Frank, who was attending the convention as a guest. Security changes were made for the event to include the banning of prop weapons primarily relating to any sort of gun which included cardboard and foam. Other weapons needed to be deemed safe by security. Although vendors were still allowed to sell toy weapons, they were to be sealed and to be taken off the premises immediately after purchase. These new rules also resulted in the cancellation of several panels focussed on making prop weapons. The attendance for the convention showed a steady decline the following days after.

In January 2018, the convention was renamed Phoenix Comic Fest. This is to avoid use of the term "Comic con", which is a registered trademark of San Diego Comic-Con International that was recently upheld by a U.S. court in a lawsuit against Salt Lake Comic Con. Bracelets were to be given to attendees in place of laminated passes. Saturday of the con, a fire alarm caused an evacuation just before 8pm, many fans stayed just outside the convention center. At 9:30pm though it was determined as a false alarm, what was left of the scheduling for Saturday night had to be cancelled and rescheduled for safety reasons. The following morning it was announced that attendees who had purchased a Saturday pass were able to trade in for a Sunday pass as compensation for Saturday's incident. The convention hours were extended as well. During the 2018 convention, it was announced that the convention would again be renamed in 2019, taking the name Phoenix Fan Fusion.

There was one casualty to this fan fusion: in 2020 when officials saw the COVID-19 pandemic as grounds for scrapping. That was deferred to 2021.

Along with panels, seminars, and workshops with comic book professionals, evenings at the convention include events such as themed prom parties, the annual Masquerade costume contest, and a Film Festival with several different prize opportunities.

In 2014, Phoenix Comicon also began a partnership with NASA, allowing attendees to participate in the FameLab program, as well as hear from NASA representatives at various panels throughout the convention. Phoenix Comicon also partnered with media guests and entertainers to offer special events outside the convention, including a performance by Brian Posehn, Myq Kaplan and Mike Drucker for their comedy group Comedy Mutant, as well as a one-man performance of Star Wars, presented by Charlie Ross.

Like most comic-book conventions, Phoenix Comicon features a large floor space for exhibitors. These include media companies, as well as comic-book dealers and collectibles merchants. And like most comics conventions, Phoenix Comicon includes an autograph and photo opportunity area, as well as the Artists' Alley where comics artists can sign autographs and sell or do free sketches.

The convention also offers attendees the chance to purchase exclusive collectibles. Most such exclusives are licensed properties of movie, comic book, and animation characters.

For the first time ever, Phoenix Comicon held a separate event in December 2014, titled Phoenix Comicon Fan Fest, at the University of Phoenix Stadium in Glendale, Arizona. The convention functioned as a smaller version of Phoenix Comicon, maintaining its usual elements of panels, workshops, and exhibitors, while expanding its focus on comic book artists, and fan interaction with its various media guests. Convention organizers stated that they saw a desire from their audience to host a convention in Arizona during the winter, but due to costs involved with renting the Phoenix Convention Center, and blocking off rooms at nearby hotels, the decision was made to host the Fan Fest in Glendale at University of Phoenix Stadium. Several television and media guests attended the first ever Fan Fest, including David Ramsey, Colin Baker and Michael Biehn, among others, including several dozen comic book artists and creators. In 2016, the Fan Fest was moved to the Phoenix Convention Center, and took place in October, rather than December. The Fan Fest event was officially canceled by Square Egg Entertainment in June 2018.

All content from Kiddle encyclopedia articles (including the article images and facts) can be freely used under Attribution-ShareAlike license, unless stated otherwise. Cite this article:
Phoenix Fan Fusion Facts for Kids. Kiddle Encyclopedia.