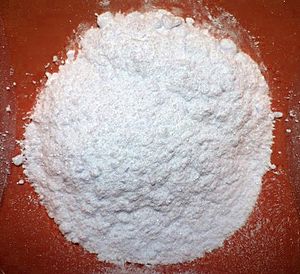 Borax in its powder form 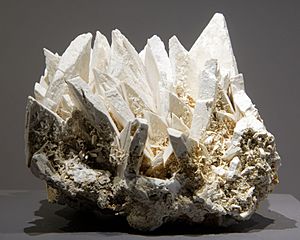 Borax is a chemical compound. It usually is in the form of a white powder. The powder has soft crystals. They are easy to dissolve in water. Its scientific name is "sodium borate". Miners find half of the borax in the world in the deserts of California. They discovered it in Death Valley in 1881.

The chemical formula for borax

Borax has many uses. It is an ingredient of many detergents, cosmetics, and enamel glazes. It is also used to make buffer solutions in biochemistry. Factories use it as a fire retardant, and to kill fungi that can harm the human body. It is also used in fiberglass, as a flux in metallurgy, slime, and as an insecticide. When mixed with water, it helps the soap clean dishes or clothes better. It can take the smell and stain off bathroom and kitchen surfaces. It also takes the smell out of shoes.

Maria Telkes used borax in the first solar-powered home, invented in 1948. The special walls of the home took energy from the sun and stored it in liquid salt. She used borax to keep the energy storage system running well. The borax kept bacteria from changing the salt solution into something different.

All content from Kiddle encyclopedia articles (including the article images and facts) can be freely used under Attribution-ShareAlike license, unless stated otherwise. Cite this article:
Borax Facts for Kids. Kiddle Encyclopedia.