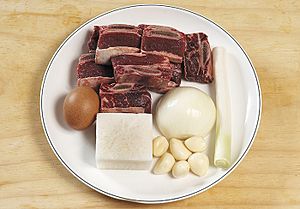 An ingredient is a substance that forms part of a mixture (in a general sense). For example, in cooking, recipes specify which ingredients are used to prepare a specific dish. Many commercial products contain a secret ingredient that is purported to make them better than competing products. In the pharmaceutical industry, an active ingredient is that part of a formulation that yields the effect expected by the customer.

In most developed countries, the law requires that ingredients be listed according to their relative weight in the product. If an ingredient itself consists of more than one ingredient (such as the cookie pieces which are a part of "cookies and cream" flavor ice cream), then that ingredient is listed by what percentage of the total product it occupies, with its own ingredients displayed next to it in brackets.

All content from Kiddle encyclopedia articles (including the article images and facts) can be freely used under Attribution-ShareAlike license, unless stated otherwise. Cite this article:
Ingredient Facts for Kids. Kiddle Encyclopedia.