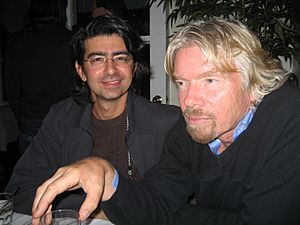 Pierre Omidyar (born June 21, 1967) created and is now the chairman of eBay. He was born in Paris, France to a French-Iranian family. Born in Paris, France, brought up by Iranian parents, Omidyar moved to the United States at the age of six. He grew up in Washington D.C. and developed an interest in computing while still at St. Andrew’s Episcopal School in Bethesda, Maryland. He graduated high school in 1984. In 1988 he graduated in computer science from Tufts University. He helped write MacDraw in 1989 for Claris, a part of Apple Computer. Two years later he co-founded Ink Development (later renamed eShop). He was 28 when he wrote the original computer code for what eventually became e-Bay. The site was launched on Labor Day, Monday, September 4 1995, under the more basic name “Auction Web.”

All content from Kiddle encyclopedia articles (including the article images and facts) can be freely used under Attribution-ShareAlike license, unless stated otherwise. Cite this article:
Pierre Omidyar Facts for Kids. Kiddle Encyclopedia.