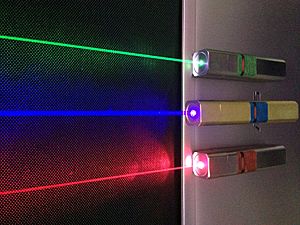 A laser pointer (or laser pen) is a small device that shines a low-powered laser light. The pointer is usually powered by a battery. It contains a laser diode that emits a very narrow laser beam of visible light. When pointed at an object, it shines a small bright spot of colored light. The pointer is held in a hand. It is used to highlight something of interest. Power is restricted in most jurisdictions not to exceed 5 milliwatts. 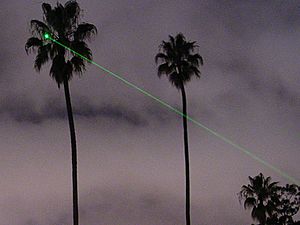 A 5 mW green laser pointer directed at a palm tree at night. Note that the beam itself is visible through Rayleigh scattering.

Laser pointers are often used in educational and business presentations and visual demonstrations as an eye-catching pointing device. Laser pointers enhance verbal guidance given to students during surgery. The suggested mechanism of explanation is that the technology enables a more precise guidance of location and identification of anatomic structures.

Industrial and research use 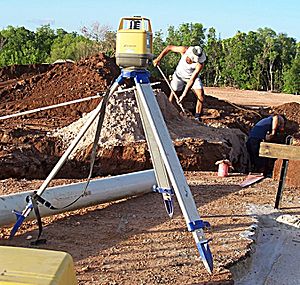 Laser pointers are used in industry. For instance, construction companies may use high quality laser pointers to enhance the accuracy of showing specific distances, while working on large-scale projects. They proved to be useful in this type of business because of their accuracy, which made them significant time-savers. What is essentially a laser pointer may be built into an infrared thermometer to identify where it is pointing, or be part of a laser level or other apparatus.

They may also be helpful in scientific research in fields such as photonics, chemistry, physics, and medicine.

Laser pointers are used in robotics, for example, for laser guidance to direct the robot to a goal position by means of a laser beam, i.e. showing goal positions to the robot optically instead of communicating them numerically. This intuitive interface simplifies directing the robot while visual feedback improves the positioning accuracy and allows for implicit localization.

Entertainment is one of the other applications that have been found for lasers. The most common use of lasers in entertainment can be seen in special effects used in laser shows. Clubs, parties and outdoor concerts all use high-power lasers, with safety precautions, as a spectacle. Laser shows are often extravagant, using lenses, mirrors and smoke.

Lasers have also become a popular plaything for pets such as cats, ferrets and dogs, whose natural predatory instincts are triggered by the moving laser and will chase it and/or try to catch it as much as possible, but obviously never succeed. As a result, laser pointers have become a popular form of entertainment for many pet owners.

However, laser pointers have few applications beyond actual pointing in the wider entertainment industry, and many venues ban entry to those in possession of pointers as a potential hazard. Very occasionally laser gloves, which are sometimes mistaken for pointers, are seen being worn by professional dancers on stage at shows. Unlike pointers, these usually produce low-power highly divergent beams to ensure eye safety. Laser pointers have been used as props by magicians during magic shows.

Laser pointers can be used in hiking or outdoor activities. Higher-powered laser pointers are bright enough to scare away large wild animals which makes them useful for hiking and camping. In these circumstances a laser pointer can also serve as a handy survival tool, as it can be used as a rescue signal in emergencies which is visible to aircraft and other parties, during both day and night conditions, at extreme distances. For example, during the night in August 2010 two men and a boy were rescued from marshland after their red laser pen was spotted by rescue teams.

All content from Kiddle encyclopedia articles (including the article images and facts) can be freely used under Attribution-ShareAlike license, unless stated otherwise. Cite this article:
Laser pointer Facts for Kids. Kiddle Encyclopedia.