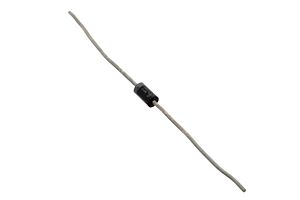 Anode and Cathode. Cathode is marked on the case.

A diode is an electronic component with two electrodes (connectors). It allows electricity to go through it only in one direction.

Diodes can be used to convert alternating current to direct current (Diode bridge). They are often used in power supplies and sometimes to decode amplitude modulation radio signals (like in a crystal radio). Light-emitting diodes (LEDs) are a type of diode that produce light.

Today, the most common diodes are made from semiconductor materials such as silicon or sometimes germanium.

The first types of diodes were called Fleming valves. They were vacuum tubes. They were inside a glass tube (much like a light bulb). Inside the glass bulb there was a small metal wire and a large metal plate. The small metal wire would heat up and emit electricity, which was captured by the plate. The large metal plate was not heated, so electricity could go in one direction through the tube but not in the other direction. Fleming valves are not used much anymore because they have been replaced by semiconductor diodes. Thomas Edison also discovered this property when working on his light bulbs. 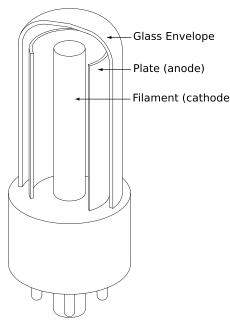 Structure of a tube diode

Semiconductor diodes are made of two types of semiconductors connected to each other. One type has atoms with extra electrons (called the n-side). The other type has atoms that want electrons (called the p-side). Because of this, the electricity will flow easily from the side with too many electrons to the side with too few. However, electricity will not flow easily in the reverse direction. Silicon with arsenic dissolved in it makes a good n-side semiconductor, while silicon with aluminum dissolved in it makes a good p-side semiconductor, but other materials can also work.

Function of a diode

If you instead give negative voltage to the p-side and positive voltage to the n-side, the electrons of the n-side want to go to the positive voltage source instead of the other side of the diode. Same thing happens on the p-side. So, current will not flow between the two sides of the diode. Increasing the voltage will eventually force electric current to flow (this is the break-down voltage). Many diodes will be destroyed by a reverse flow but some are made that can survive it.

When the temperature increases, the cut-in voltage goes down. This makes it easier for electricity to pass through the diode.

There are many types of diodes. Some have very specific uses and some have a variety of uses.

This changes A/C (alternating current, like in a wall plug in a house) to D/C (direct current, used in electronics). The standard rectifier diode works like a normal diode, with specific requirements. It should handle high current, not be affected by temperature, have a low cut-in voltage and support quick changes in the direction of current flow. They are used in all of modern analog and digital electronics.

An LED produces light when electricity flows through it. It is a longer lasting and more efficient way of creating light than incandescent light bulbs. Depending on how it was made, the LED can make different colors. LEDs were first used in the 1970's. The light-emitting diode may eventually replace the light bulb as developing technology makes it brighter and cheaper (it is already more efficient and lasts longer). In the 1970's the LEDs were used to show numbers in appliances such as calculators, and as a way to show the power was on for larger appliances.

A photodiode is a photo detector (the opposite of a light-emitting diode). It responds to light that comes in. Photodiodes have a window or optical fiber connection, which lets light in to the sensitive part of the diode. Diodes usually have strong resistance; the light reduces the resistance.

A zener diode is like a normal diode, but instead of being destroyed by a big reverse voltage, it lets electricity through. The voltage needed for this is called the breakdown voltage or Zener voltage. Because it is built with a known breakdown voltage it can be used supply a known voltage.

The symbol is the symbol of a diode with a kind of snag. It is used in circuits with high frequencies up to GHz. It turns off very quickly when the forward voltage stops. It uses the current that flows after the polarity was reversed to do this.

The construction of this diode has an intrinsic (normal) layer between the n- and the p-sides. At slower frequencies, it acts much like a standard diode. But at high speeds it can't keep up with fast changes and starts to act like a resistor. The intrinsic layer also lets it handle high power inputs, and can be used as a photodiode.

The symbol of this is the diode symbol, with an ‘S’ at the peak. Instead of both sides being a semiconductor (like silicon), one side is metal, like aluminum or nickel. This reduces the cut-in voltage to about 0.3 volt. This is about half of the threshold voltage of a usual diode. The function of this diode is that no minority carriers are injected - the n-side only has holes, not electrons, and the p-side only has electrons, not holes. Because this is cleaner, it can react faster, without diffusion capacitance that can slow it down. It also creates less heat and is more efficient. But it does has some current leakage with reverse voltage.

In the symbol of the tunnel diode there´s a kind of additional square bracket at the end of the usual symbol.

A tunnel diode consists of a highly doped pn-junction. Because of this high doping, there is only a very narrow gap where the electrons are able to pass through. This tunnel-effect appears in both directions. After a certain amount of electrons have passed, the current through the gap decreases, until the normal current through the diode at the threshold voltage begins. This causes an area of a negative resistance. These diodes are used to deal with really high frequencies (100 GHz). It's also resistant to radiation, so they are used in spacecraft. They are also used in microwaves and refrigerators.

The symbol has at the end of the diode a sign that looks like a big I. It is made similar to the tunnel diode, but the n- and the p-layer aren´t doped as high. It allows current to flow backwards with small negative voltages. It can be used to rectify low voltages (less than 0.7 volts).

Instead of two layers like a normal diode, this has four layers, it is basically two diodes put together, with a gate in the middle. When voltage goes between the gate and the cathode the lower transistor will turn on. This lets the current go through, which activates the upper transistor, and then the current will not need to be turned on by a gate voltage.

All content from Kiddle encyclopedia articles (including the article images and facts) can be freely used under Attribution-ShareAlike license, unless stated otherwise. Cite this article:
Diode Facts for Kids. Kiddle Encyclopedia.