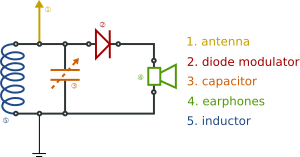 A diagram of a crystal radio receiver

A crystal radio, sometimes called a crystal set, is a very simple AM radio receiver, that does not need batteries to work. A long wire antenna gathers enough of the radio signals from nearby transmitters to power a crystal diode, which demodulates the signals, and plays them as sound through an earphone or small headset.

Crystal radios have come and gone many times in history. They were built in the early days of radio broadcasting by amateurs, and people who could not afford a well-made radio. They became popular again during the Great Depression, when money was scarce. During World War II, American soldiers built "foxhole radios" that used a razor blade and pencil point instead of a crystal. (German and Italian troops had equipment to detect normal superheterodyne radio receivers working, so an alternate choice was a wise one.)

After the war ended, amateurs built more crystal sets, and children began to make them as science and hobby projects. Later during the Vietnam War prisoners of war again built simple radios, and soldiers used Slinky springs as antennas.

Hobby clubs still exist, that give information to persons who want to build a crystal radio or similar radio project.

All content from Kiddle encyclopedia articles (including the article images and facts) can be freely used under Attribution-ShareAlike license, unless stated otherwise. Cite this article:
Crystal radio Facts for Kids. Kiddle Encyclopedia.