A razor is a tool with one or more blades used by men for shaving the hair from their face, and by women for shaving hair from their legs and underarms. The earliest razors known are from the Bronze Age. They were made of bronze and had an oval shape. There are different kinds of razors today, including straight razors, which are rarely used, and safety razors and electric razors.

A slightly different type of electric razor is used to trim and cut hair from the head, because hair can be cut much more quickly with electric haircutting razors than with scissors. 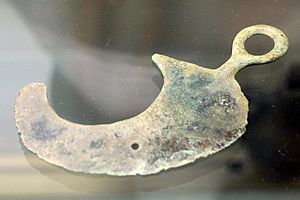 Razors have been identified from many Bronze Age cultures. These were made of bronze or obsidian and were generally oval in shape, with a small tang protruding from one of the short ends.

Various forms of razors were used throughout history, which are different in appearance but similar in use to modern straight razors. In prehistoric times clam shells, shark teeth, and flint were sharpened and used to shave with. Drawings of such blades were found in prehistoric caves. Some tribes still use blades made of flint to this day. Excavations in Egypt have unearthed solid gold and copper razors in tombs dating back to the 4th millennium BC. Several razors as well as other personal hygiene artifacts were recovered from Bronze Age burials in northern Europe and are believed to belong to high status individuals. The Roman historian Livy reported that the razor was introduced in ancient Rome in the 6th century BC. by legendary king Lucius Tarquinius Priscus. Priscus was ahead of his time because razors did not come to general use until a century later.

The first modern straight razor complete with decorated handles and hollow ground blades was constructed in Sheffield, in England, the centre of the cutlery industry, in the 18th and 19th centuries. Benjamin Huntsman produced the first superior hard steel grade, through a special crucible process, suitable for use as blade material in 1740, though it was first rejected in England. Huntsman's process was adopted by the French sometime later; albeit reluctantly at first because of nationalist sentiments. The English manufacturers were even more reluctant than the French to adopt the process and only did so after they saw its success in France. Sheffield steel, a highly polished steel, also known as Sheffield silver steel and famous for its deep gloss finish, is considered a superior quality steel and is still used to this day in France by such manufacturers as Thiers Issard. 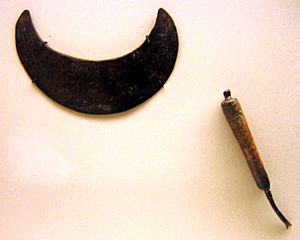 Razor (top) and nail cutter with bone handle (bottom) found in a grave of the Hallstatt culture.

In the 18th and 19th centuries, the wealthy had servants to shave them or could frequent barbershops. Daily shaving was not a widespread practice in the 19th century so some people never shaved. The custom of shaving every day among American men is a 20th-century innovation which was started after World War I. Men were required to shave daily so their gas masks would fit properly and this became much easier with the advent of the safety razor, which was standard issue during the war. In the 19th century, cutlers in Sheffield, England and Solingen, Germany produced a variety of razors. 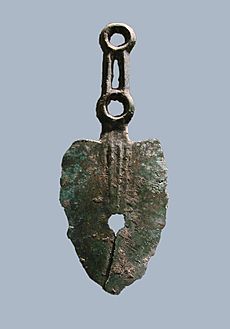 Razor made of bronze from the first Iron Age

Straight razors were the most common form of shaving before the 20th century and remained common in many countries until the 1950s. Barbers were specially trained to give customers a thorough and quick shave, and a collection of straight razors ready for use was a common sight in most barbershops. Barbers still have them, but they use them less often.

Straight razors eventually fell out of fashion. Their first challenger was manufactured by King C. Gillette: a double-edged safety razor with replaceable blades. Gillette's idea was the use of the "loss leader" concept, in which the razors were sold at a loss, but the replacement blades earned a high margin and provided continuous sales. They were immensely successful because of advertising campaigns and slogans denigrating the straight razor's effectiveness and questioning its safety.

These new safety razors did not require any serious tutelage to use. The blades were extremely hard to sharpen, and were meant to be thrown away after one use, and rusted quickly if not discarded. They also required a smaller initial investment, though they cost more over time. Despite its long-term advantages, the straight razor lost significant market share. And as shaving became less intimidating and men began to shave themselves more, the demand for barbers providing straight razor shaves decreased. 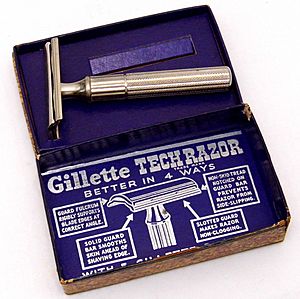 In 1960, stainless steel blades which could be used more than once became available, reducing the cost of safety-razor shaving. The first such blades were made by the Wilkinson firm, famous maker of ceremonial swords, in Sheffield. Soon Gillette, Schick, and other manufacturers were making stainless-steel blades.

Before the 20th century, straight razors were widely used. A straight razor consists of a knife blade, which can be reused. Since this blade is usually very sharp, there is a high risk of cutting oneself with the razor while scraping off the hair. Today, such razors are rarely used any more, except by barbers.

In the late 18th century, French engineer Jean-Jacques Perret invented the safety razor. With this system, the skin is protected, from all but the edge of the blade. This makes cutting much harder. The first such razor was released in 1875 by the Campfe Brothers. In 1901, King Camp Gillette invented the first razor with disposable razor blades. The blades were thrown away after several uses. The number of times a disposable blade can be used depends on beard coarseness and shaving technique, but the average is about one week. The company, Gilette still makes such razors today. They sell the razor relatively cheaply, and make big profits on the razor blades.

For face and body hair 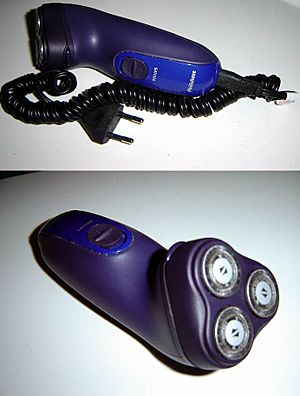 The electric razor was the next big step. With electric razors, shaving cream, soap or water is no longer needed. Electric razors use electricity to either make blades rotate or oscillate. That is the blades are either moved in circles, or they are moved up and down (or left and right). The razor is usually powered by a rechargeable battery. Prof. Alexandre Horowitz invented the concept of rotating blades which is still marketed as Philishave by Philips.

Shaving using any of the shaving methods (straight razor, safety razor, or electric razor) can have side-effects, including cuts, abrasions, and irritated skin. Razor bumps can also occur from removing ingrown hairs. To reduce the likelihood of cuts, abrasions, and irritated skin, people can use a fresh razor blade and prepare their faces by washing in hot, soapy water and then applying a shaving cream lather. There is a razor called Bump Fighter that is designed to reduce razor bumps and other side effects, but it uses special cartridges that are more expensive than standard double-edge razor blades.

All content from Kiddle encyclopedia articles (including the article images and facts) can be freely used under Attribution-ShareAlike license, unless stated otherwise. Cite this article:
Razor Facts for Kids. Kiddle Encyclopedia.