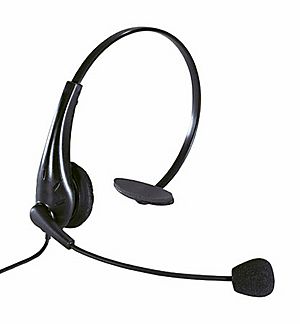 A headset is a headphone with a microphone. People can listen to sound with headphone and can record sound with a microphone. A headset is easy to use because it can be used without hands, just like a telephone. A person only needs to put the headset on his/her head and then can talk with a mic. Many people use headsets at the computer so they can converse and type easily. Headsets normally have only one speaker like a telephone, but also can be made with speakers for both ears.

Nowadays there are wire headset and wireless headset, which means there's no wire between the computer and the headset. It works by radio waves. A wireless headset can be put in a pocket or a bag easily due to its small size. This can be used for soundproofing.

The inventor of the headset is Nathaniel Baldwin, but his version could not be sold to people. The second headset is the US Army's headset for airplane pilots in World War I.

All content from Kiddle encyclopedia articles (including the article images and facts) can be freely used under Attribution-ShareAlike license, unless stated otherwise. Cite this article:
Headset Facts for Kids. Kiddle Encyclopedia.