A rectifier is a device that can convert Alternating current (AC) to Direct current (DC). This is a process called rectification. Rectifiers are made of metals like copper, iron, and silver. They can amplify things, such as sound in a stereo. 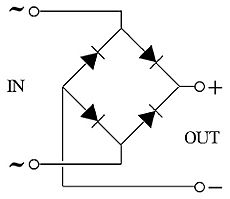 Diode bridge is electrical circuit that consists of four diodes. It acts as a full wave rectifier to convert alternating current to direct current.

All content from Kiddle encyclopedia articles (including the article images and facts) can be freely used under Attribution-ShareAlike license, unless stated otherwise. Cite this article:
Rectifier Facts for Kids. Kiddle Encyclopedia.