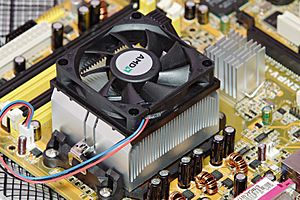 Two heat sinks inside a computer.

A heat sink is an object that cools another part that is too hot. The heat sink is in contact with the part that should be cooled. It takes heat away and dissipates it, for example into the air around it.

Heat sinks are found in most computers. The chips inside a computer can get very hot. Therefore they need to be cooled, so that they don't break. This is usually done with a heat sink. Heat sinks are also found in most high fidelity audio amplifiers.

All content from Kiddle encyclopedia articles (including the article images and facts) can be freely used under Attribution-ShareAlike license, unless stated otherwise. Cite this article:
Heat sink Facts for Kids. Kiddle Encyclopedia.