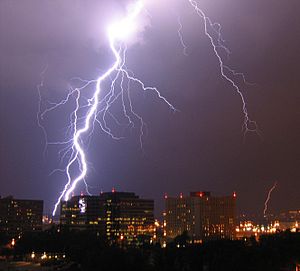 Lightning is a highly visible form of energy transfer and is an example of plasma present at Earth's surface. Typically, lightning discharges 30,000 amperes at up to 100 million volts, and emits light, radio waves, X-rays and even gamma rays. Plasma temperatures in lightning can approach 28,000 kelvins (27,726.85 °C) (49,940.33 °F) and electron densities may exceed 1024 m−3.

Phase transition or phase change, takes place in a thermodynamic system from one phase or state of matter to another one by heat transfer. Phase change examples are the melting of ice or the boiling of water. The Mason equation explains the growth of a water droplet based on the effects of heat transport on evaporation and condensation. 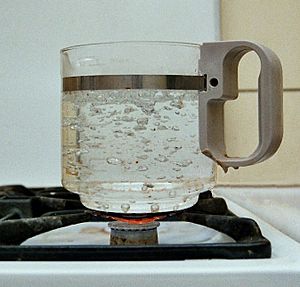 The boiling point of a substance is the temperature at which the vapor pressure of the liquid equals the pressure surrounding the liquid and the liquid evaporates resulting in an abrupt change in vapor volume.

At standard atmospheric pressure and low temperatures, no boiling occurs and the heat transfer rate is controlled by the usual single-phase mechanisms. As the surface temperature is increased, local boiling occurs and vapor bubbles nucleate, grow into the surrounding cooler fluid, and collapse. This is sub-cooled nucleate boiling, and is a very efficient heat transfer mechanism. At high bubble generation rates, the bubbles begin to interfere and the heat flux no longer increases rapidly with surface temperature (this is the departure from nucleate boiling, or DNB).

At similar standard atmospheric pressure and high temperatures, the hydrodynamically-quieter regime of film boiling is reached. Heat fluxes across the stable vapor layers are low, but rise slowly with temperature. Any contact between fluid and the surface that may be seen probably leads to the extremely rapid nucleation of a fresh vapor layer ("spontaneous nucleation"). At higher temperatures still, a maximum in the heat flux is reached (the critical heat flux, or CHF). 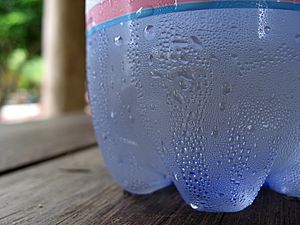 Condensation occurs when a vapor is cooled and changes its phase to a liquid. During condensation, the latent heat of vaporization must be released. The amount of the heat is the same as that absorbed during vaporization at the same fluid pressure.

There are several types of condensation:

Melting is a thermal process that results in the phase transition of a substance from a solid to a liquid. The internal energy of a substance is increased, typically with heat or pressure, resulting in a rise of its temperature to the melting point, at which the ordering of ionic or molecular entities in the solid breaks down to a less ordered state and the solid liquefies. Molten substances generally have reduced viscosity with elevated temperature; an exception to this maxim is the element sulfur, whose viscosity increases to a point due to polymerization and then decreases with higher temperatures in its molten state.

All content from Kiddle encyclopedia articles (including the article images and facts) can be freely used under Attribution-ShareAlike license, unless stated otherwise. Cite this article:
Heat transfer Facts for Kids. Kiddle Encyclopedia.