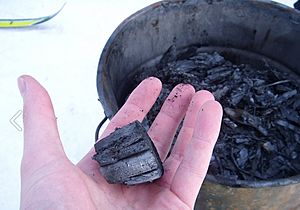 A piece of biochar

Biochar is a type of charcoal added to soil that acts as plant food, or fertilizer. Biochar is made by heating biomass like wood in an oven to very high temperatures. This removes all of the water and easy to burn material from the biomass leaving only carbon. The final result is fragile and dark black charcoal.

Some people propose making biochar to remove carbon dioxide from the atmosphere. Carbon dioxide is a greenhouse gas that traps heat in the atmosphere, causing climate change. If a lot of biochar were made then there would be less carbon dioxide in the air, meaning less heat would be trapped. This is known as a carbon sink, because the carbon is sunk or put into a long lasting material instead of floating in the air.

When biochar is made the biomass it is made from has most of its material removed. This means that biochar is very light and filled with tiny holes. These holes can hold water and nutrients which act as food for plants growing in biochar. Biochar can be soaked in nutrients to "charge" it which makes it a very good soil additive or fertilizer. The holes in biochar can also trap toxins which make water unsafe.

Biochar was used by people in the Amazon to make their poor quality soil better for growing food. This made the soil very dark and the dark soil can still be seen today.

Biochar can be mixed with molasses for use as animal food. The biochar helps digestion and reduces the amount of methane produced by cows. Feces from animals that eat biochar is a high quality fertilizer.

All content from Kiddle encyclopedia articles (including the article images and facts) can be freely used under Attribution-ShareAlike license, unless stated otherwise. Cite this article:
Biochar Facts for Kids. Kiddle Encyclopedia.