Sir Richard Charles Nicholas Branson (born 18 July 1950) is a British business magnate, investor, author and philanthropist. He founded the Virgin Group in the 1970s, which controls more than 400 companies in various fields.

Branson expressed his desire to become an entrepreneur at a young age. His first business venture, at the age of 16, was a magazine called Student. In 1970, he set up a mail-order record business. He opened a chain of record stores, Virgin Records—later known as Virgin Megastores—in 1972. Branson's Virgin brand grew rapidly during the 1980s, as he started Virgin Atlantic airline and expanded the Virgin Records music label. In 2004, he founded spaceflight corporation Virgin Galactic, based at Mojave Air and Space Port, noted for the SpaceShipTwo suborbital spaceplane designed for space tourism.

In March 2000, Branson was knighted at Buckingham Palace for "services to entrepreneurship". For his work in retail, music and transport (with interests in land, air, sea and space travel), his taste for adventure, and for his humanitarian work, he has become a prominent global figure. In 2007, he was placed in the Time 100 Most Influential People in The World list.

In April 2018, Forbes listed Branson's estimated net worth at US$5.1 billion.

Branson has been diagnosed with attention-deficit hyperactivity disorder. He lives on an island he owns in the Caribbean. 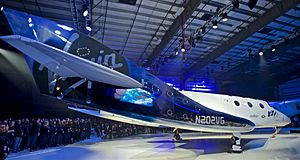 On 11 July 2021, Richard Branson took a flight with Beth Moses, Sirisha Bandla and Colin Bennett and reached edge of space (86 kilometers or 53 miles) on a Virgin Galatic spacecraft called VSS Unity. This made him the first billionaire founder of a space company to travel to the edge of space.

All content from Kiddle encyclopedia articles (including the article images and facts) can be freely used under Attribution-ShareAlike license, unless stated otherwise. Cite this article:
Richard Branson Facts for Kids. Kiddle Encyclopedia.