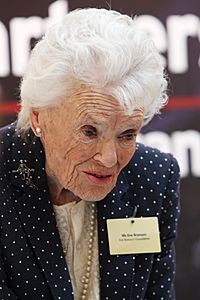 Evette Huntley Branson (née Flindt; 12 July 1924 – 11 January 2021) was a British philanthropist and child welfare activist. She was the mother of Richard Branson. Branson was born in Edmonton, Middlesex.

Branson was a member of the board of directors of the International Centre for Missing & Exploited Children ("ICMEC").

All content from Kiddle encyclopedia articles (including the article images and facts) can be freely used under Attribution-ShareAlike license, unless stated otherwise. Cite this article:
Eve Branson Facts for Kids. Kiddle Encyclopedia.