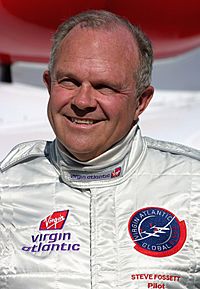 James Stephen Fossett (April 22, 1944 – September 3, 2007) was an American businessman and a record-setting aviator, sailor and adventurer. In 2002, he became the first balloonist to circumnavigate the world alone. In 2005, he completed the first nonstop global flight in an airplane by himself. He was also known for his friendship with billionaire Richard Branson. Branson's Virgin Group sponsored some of Fossett's adventures.

On September 3, 2007, Fossett went missing while flying a light aircraft over the Great Basin Desert. A year later, in September 2008, a hiker found some of Fossett's belongings in the Sierra Nevada mountain range, California. This lead to the discovery of his aircraft and some of his remains.

All content from Kiddle encyclopedia articles (including the article images and facts) can be freely used under Attribution-ShareAlike license, unless stated otherwise. Cite this article:
Steve Fossett Facts for Kids. Kiddle Encyclopedia.