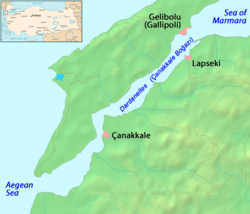 The Dardanelles, a long narrow strait dividing the Balkans (Europe) along the Gallipoli peninsula from Asia Minor.

The Dardanelles is the narrow strait in northwestern Turkey connecting the Aegean Sea to the Sea of Marmara. It marks the division between Asia to the East, and Europe to the west. As a waterway it is highly significant to all countries in the region.

From Ancient Greek times it is also known as the Hellespont.

All content from Kiddle encyclopedia articles (including the article images and facts) can be freely used under Attribution-ShareAlike license, unless stated otherwise. Cite this article:
Dardanelles Facts for Kids. Kiddle Encyclopedia.