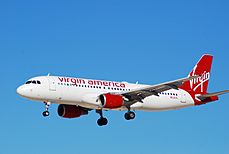 Virgin America was an U.S. airline. It began operations in 2007. Its corporate headquarters are in California. The airline uses Airbus A319 and Airbus A320 aircraft. It flies to destinations throughout the United States and Mexico.

The airline is partly owned by the Virgin Group. The Virgin Group also controls Virgin Atlantic Airways, Virgin Australia and Virgin Samoa. However, the Virgin Group has less than a fifty percent share of the new company. This is due to U.S. federal laws that do not allow foreign control of domestic airlines.

Virgin America was looking to sell all or part of its airline in early 2016. A merger with JetBlue Airways was very possible. However, on April 4, 2016, Alaska Airlines announced it would buy Virgin America. Alaska retired the Virgin America name on April 25, 2018.

All content from Kiddle encyclopedia articles (including the article images and facts) can be freely used under Attribution-ShareAlike license, unless stated otherwise. Cite this article:
Virgin America Facts for Kids. Kiddle Encyclopedia.