Around the World in 80 Days is a 2004 American action adventure comedy film based on Jules Verne's 1873 novel of the same name and remake of the movie of the same name of 1956. It stars Jackie Chan, Steve Coogan and Cécile de France. The film is set in the nineteenth century and centers on Phileas Fogg (Coogan), here reimagined as an eccentric inventor, and his efforts to circumnavigate the globe in 80 days. During the trip, he is accompanied by his Chinese valet, Passepartout (Chan). For comedic reasons, the film intentionally deviated wildly from the novel and included a number of anachronistic elements. With production costs of about $110 million and estimated marketing costs of $30 million, it earned $24 million at the U.S. box office and $72 million worldwide, making it a box office flop. It was Arnold Schwarzenegger's last film before he took a hiatus from acting to become Governor of California until 2010's The Expendables. 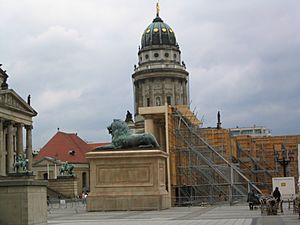 Film set at Berlin's Gendarmenmarkt in April 2003. The building doubles as a background building outside London's Royal Academy of Science.

Lau Xing robs the Bank of England and hides in Phileas Fogg's house, giving his name as "Passport...too". Fogg hears "Passepartout" and hires him as valet. Passepartout helps Fogg break the 50-mph speed barrier. At the Royal Academy of Science, Fogg is insulted by Baron Kelvin. Fogg bets that he can travel around the world in 80 days. If he wins he will replace Kelvin as Minister of Science, if not he will be ruined. Fogg and Passpartout take a carriage out of London after a confrontation with corrupt Inspector Fix, hired by Kelvin.

Passpartout and Fogg journey to Paris, where Passepartout must evade General Fang's warriors. Fang wants the jade Buddha previously given to Lord Kelvin but stolen by Passepartout. Pretending to take Fogg to see Thomas Edison, Passepartout leads him to impressionist painting student Monique La Roche. Passepartout fights the minions while his boss discusses impressionism. The two men and Monique depart in a hot-air balloon, chased by Fang's warriors.

In Turkey, Prince Hapi orders the men to leave while Monique must become his seventh wife. The men convince Hapi to release Monique for "The Thinker" statue. The three travelers escape.

Kelvin learns about the bank robbery. He orders the British-American colonial authorities in India to arrest both men. Passepartout sees notice of the price on his head and warns his companions. Disguised as women they are attacked by Fang's warriors. Using Inspector Fix and a sextant as weapons, Fogg and Passepartout defeat their assailants and flee to China.

In a Chinese village they are captured by the Black Scorpions. Recognized, Lau Xing challenges the leader of the group to a fight. At first he fights alone and is defeated; moments later he is joined by his fellow "Ten Tigers of Canton" to defeat the Black Scorpions. The jade Buddha is returned to the village temple.

Fogg desires to continue alone, disappointed and feeling used by his companions. He travels to San Francisco and is tricked out of his money. He is found destitute by Lau Xing and Monique who have followed him. In the Western desert they find the Wright brothers who discuss their prototype flying machine. Fogg suggests a few changes, which are eagerly taken.

In New York City, a jubilant crowd prevents them from their ship. A policeman leads them to an ambush in a workshop. The three friends fight Fang and her minions and win. Though Fogg could have gotten to the boat, he misses it to help Lau Xing. Fogg feels he has lost, but the other two say they may still make it if they catch the next ship.

They board an old ship and Fogg builds a plane out of the ship's old wood, promising a new ship to the captain. The ship's crew builds a catapult to launch it. The three fly to London and crash-land at the Royal Academy. Kelvin sends police to hinder them, and the clock strikes noon, ending the wager.

Kelvin proclaims himself the victor. Monique, Fix and other ministers attest to Kelvin's unfair methods. Kelvin insults Queen Victoria who overhears. Kelvin is arrested. Fogg realizes he is one day early thanks to crossing the International Date Line. He ascends the stairs of the Academy and kisses Monique, victorious in his bet.

All content from Kiddle encyclopedia articles (including the article images and facts) can be freely used under Attribution-ShareAlike license, unless stated otherwise. Cite this article:
Around the World in 80 Days (2004 film) Facts for Kids. Kiddle Encyclopedia.