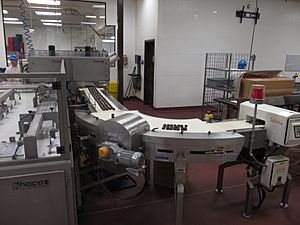 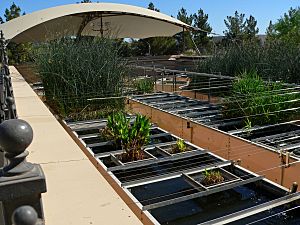 The botanical gardens on the site

The Ethel M Chocolate Factory is located in Henderson, Nevada and continues to produce gourmet premium chocolate for all of the Ethel M and Ethel's brand chocolates. The company distributes their products mainly via phone and internet on their website, although they also operate several retail outlets located in and around Las Vegas, Nevada. Also located at this plant are the Ethel M Botanical Cactus Gardens (which feature over 300 species of desert plants),a part of the factory is open to the public and visitors can take self-guided tours.

Ethel M is owned by Mars, Incorporated and was named after the mother of Forrest Mars, Sr.

Forrest Mars Sr. created Ethel M Chocolates in 1978, which opened in 1980, as a project to cure the boredom he experienced after retiring. According to researcher J.G. Brenner, "Forrest established the venture in Nevada because it is one of the few states that allowed the sale of liqueur-filled cordials." He started Ethel M with two of his past associates, Alan Thomas, as General Manager, and Dean Musser, as CFO. Mars commissioned engineer Stephen H. Edelblute to design and build the factory, former candy factory owner Fred Dent to assist in developing his chocolates and Karen Grover, a recent research assistant. Within a few years of its opening "the company had reached annual sales of $150 million, from seventy Ethel M stores throughout the West."

In late 2007 the company responded to public demand for the classic line of chocolates by re-releasing six varieties of chocolates in their retail stores in the Las Vegas area.

Other than at the factory (located at 2 Cactus Garden Drive), Ethel's stores can be found in Nevada at the California Hotel, and Gates A-E of McCarran International Airport.

All content from Kiddle encyclopedia articles (including the article images and facts) can be freely used under Attribution-ShareAlike license, unless stated otherwise. Cite this article:
Ethel M Chocolate Factory Facts for Kids. Kiddle Encyclopedia.