Overton is a community that is part of the unincorporated town of Moapa Valley in Clark County, Nevada. Overton is on the north end of Lake Mead. It is home to Perkins Field airport and Echo Bay Airport.

Overton was originally settled in 1869 with Helaman Pratt serving as branch president. A regular LDS branch was organized there in 1883. In the 1880s, Overton was the location of the only store in the lower Moapa Valley and attracted people from neighboring localities who arrived in Overton to buy supplies. In the 1930s, the town of St. Thomas was submerged by water as Lake Mead was being filled, and the majority of its population relocated to Overton. After that, Overton developed as the main core of the business community in the lower Moapa Valley. It also hosted most of the social events in the area.

Overton is located in Moapa Valley 65 mi (105 km) northeast of Las Vegas, Nevada. The town features a stunning landscape of mesas, foothills, and nearby Lake Mead. It is also the settlement closest to Valley of Fire State Park.

Overton is in the Moapa Valley, Nevada Census Bureau CDP.

Two more entries are located in the vicinity of Overton. These are the wreck of Boeing B-29 Serial No. 45-21847 submerged in Lake Mead and Pueblo Grande de Nevada.

Near Overton, there are deposits of magnesite, kaolin, and gypsum. Silica sand is also being produced. 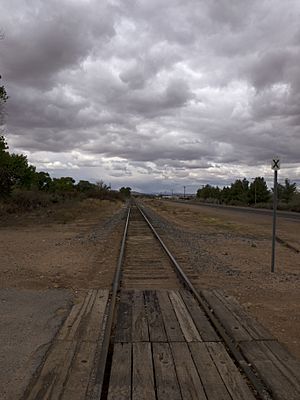 Nevada State Route 169 connects Overton with Interstate 15 (exit 93) in the north and Lake Mead National Recreation Area in the south. South of Overton, the highway into Valley of Fire state park (formerly a part of Nevada State Route 169, decommissioned in 2001) branches off west.

Overton is located on the former St. Thomas branch of Los Angeles and Salt Lake Railroad which runs along the Moapa Valley, from north to south. The construction of the branch started in 1911 from Moapa station, which lies on the main line between Salt Lake City and Las Vegas. By March 1912, the construction was completed. In 1919, the railway was made a double track. In 1938 and 1939, the final six-mile segment leading to St. Thomas, which was submerged under waters of Lake Mead, was abandoned. The branch currently extends to the town southern outskirts, serving the gypsum plant. There is no passenger service, but there is freight traffic.

All content from Kiddle encyclopedia articles (including the article images and facts) can be freely used under Attribution-ShareAlike license, unless stated otherwise. Cite this article:
Overton, Nevada Facts for Kids. Kiddle Encyclopedia.