Valley of Fire State Park is a public recreation and nature preservation area covering nearly 46,000 acres (19,000 ha) located 16 miles (26 km) south of Overton, Nevada. The state park derives its name from red sandstone formations, the Aztec Sandstone, which formed from shifting sand dunes 150 million years ago. These features, which are the centerpiece of the park's attractions, often appear to be on fire when reflecting the sun's rays. It is Nevada's oldest state park, as commemorated with Nevada Historical Marker #150. It was designated as a National Natural Landmark in 1968.

Complex uplifting and faulting of the region, followed by extensive erosion, have created the present landscape. The rough floor and jagged walls of the park contain brilliant formations of eroded sandstone and sand dunes more than 150 million years old. Other important rock formations include limestones, shales, and conglomerates. 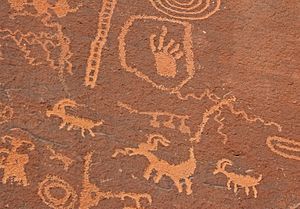 Prehistoric users of the Valley of Fire included the Ancient Pueblo Peoples, also known as the Anasazi, who were farmers from the nearby fertile Moapa Valley. Their approximate span of occupation has been dated from 300 BC to 1150 AD. Their visits probably involved hunting, food gathering, and religious ceremonies, although scarcity of water would have limited their stay. Fine examples of rock art (petroglyphs) left by these ancient peoples can be found at several sites within the park.

The creation of Valley of Fire State Park began with transfer of 8,760 acres (3,550 ha) of federal land to the state at Nevada in 1931. Work on the park was initiated by the Civilian Conservation Corps in 1933. The park opened in 1934; it achieved official designation by the state legislature in 1935.

Valley of Fire Road is the main road through the park. The 10.5 mi (16.9 km) road connects the east and west entrances of the park. It was designated as a Nevada Scenic Byway on June 30, 1995. 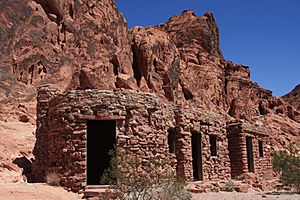 Although petroglyphs are present throughout the entire park, Mouse's Tank and Atlatl Rock are two areas in particular which have many petroglyphs while being relatively easily accessible. The park also contains three cabins built by the Civilian Conservation Corps. There are facilities for picnicking, camping, and hiking.

Valley of Fire is a popular location for shooting automobile commercials and other commercial photography. It has provided a setting for the following films and television shows:

All content from Kiddle encyclopedia articles (including the article images and facts) can be freely used under Attribution-ShareAlike license, unless stated otherwise. Cite this article:
Valley of Fire State Park Facts for Kids. Kiddle Encyclopedia.