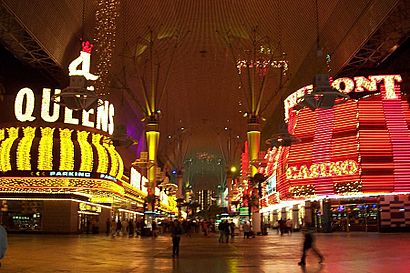 Casinos of Fremont Street at night

Downtown Las Vegas (commonly abbreviated as DTLV) is the central business district and historic center of Las Vegas, Nevada. It is the original townsite and was the gambling district of Las Vegas prior to the Strip, and the area still incorporates downtown gaming. As the urban core of the Las Vegas Valley, it features a variety of hotel and business highrises, cultural centers, historical buildings and government institutions, as well as residential and retail developments. Downtown is located in the center of the Las Vegas Valley and just north of the Las Vegas Strip, centered on Fremont Street, the Fremont Street Experience and Fremont East. The city defines the area as bounded by I-15 on the west, Washington Avenue on the north, Maryland Parkway on the east and Sahara Avenue on the south.

Perhaps the earliest visitors to the Las Vegas area were nomadic Paleo-Indians, who traveled here 10,000 years ago, leaving behind petroglyphs. Anasazi and Paiute tribes came here at least 2,000 years ago.

The area was named Las Vegas, which is Spanish for the meadows, in the 1800s because it featured abundant wild grasses, as well as desert spring waters for westward travelers.

The year 1844 marked the arrival of John C. Frémont, whose writings helped lure pioneers to the area. Downtown Las Vegas’ Fremont Street is named after him.

Eleven years later, members of the LDS Church chose Las Vegas as the site to build a fort halfway between Salt Lake City and Los Angeles, where they would travel to gather supplies. The fort was abandoned several years afterward. The remainder of this fort can still be seen at the intersection of Las Vegas Boulevard and Washington Avenue at the Old Las Vegas Mormon Fort State Historic Park.

Las Vegas was founded as a city in 1905, when 110 acres of land adjacent to the Union Pacific Railroad tracks were auctioned in what would become the downtown area. In 1911, Las Vegas was incorporated as a city.

The year 1931 was a pivotal one for Las Vegas. At that time, Nevada legalized casino gambling and reduced residency requirements for divorce to six weeks. This year also witnessed the beginning of construction on nearby Hoover Dam. The influx of construction workers and their families helped Las Vegas avoid economic calamity during the Great Depression. It was completed in 1935.

The 1950s saw the opening of the Moulin Rouge Hotel, the first racially integrated casino-hotel in Las Vegas.

In 1951, the first atomic bomb detonation at the Nevada Test Site, 65 miles northwest of Las Vegas, occurred. City residents and visitors were able to witness the mushroom clouds until 1963, when the Limited Test Ban Treaty required that nuclear tests be moved underground.

During the 1960s, corporations and business powerhouses such as Howard Hughes were building and buying hotel-casino properties. Gambling was referred to as "gaming," which transitioned into legitimate business.

In 1989, entrepreneur Steve Wynn changed the face of the Las Vegas gaming industry by opening up The Mirage, the Las Vegas Strip’s first mega-casino resort. This strengthened the pull of visitors away from the downtown area.

In 1995, the Fremont Street Experience in Las Vegas’ downtown area was opened. This canopied, five-block area features 12.5 million LED lights and 550,000 watts of sound from dusk until midnight during shows held on the top of each hour.

Due to years of revitalization efforts, 2012 was dubbed “The Year of Downtown.” Hundreds of millions of dollars’ worth of projects made their debut at this time. They included The Smith Center for the Performing Arts and Discovery Children’s Museum, the Mob Museum, the Neon Museum, a new City Hall complex.

Fremont Street is home to most of downtown's hotels and casinos. These are the original casinos of Las Vegas, which existed before the more famous Las Vegas Strip. The Fremont Street Experience is a canopied street of the downtown area where casinos have been connected to the street and to each other in a unique visual manner. With more than 2 million lights and a state-of-the-art sound system, the Fremont Street Experience brings nightly shows through the world's largest audio-video system. The $70 million attraction features the ultimate in multisensory entertainment. It also provides a variety of exciting special events, cuisine, entertainment and live concerts throughout the year. 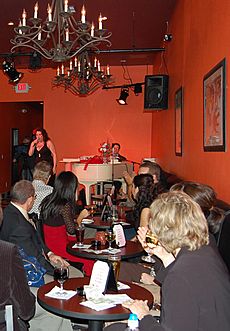 An eclectic range of bars and venues can be found around Fremont East.

Property and business owners have been working to redevelop Fremont Street just east of the Fremont Street Experience. In 2002, the city of Las Vegas Redevelopment Agency joined with Fremont East property and business owners to create a business improvement district, as well as pay for a $5.5 million streetscape improvement. This area is called the Fremont East Entertainment District. It features an eclectic mix of bars, clubs and restaurants. Centered on Las Vegas Boulevard on Fremont Street, this three-block renovation includes pedestrian-friendly street redesign, landscaping and retro-looking neon signage.

Officially called 18b, The Las Vegas Arts District – named after the 18 blocks the district originally encompassed – this area is home to the city's arts scene with its mix of art galleries, studios and stores. Many arts district stores offer antiques, vintage clothing and mid-20th century furniture/furnishings and other collectible items. Centered on Main Street and Charleston Boulevard, the area hosts the popular First Friday festival every month featuring art, music and other performances.

Symphony Park is a mixed-use urban district being built on the land to the west of Fremont and Main streets. It will eventually feature a mix of retail, medical, hotel and residential developments. The city of Las Vegas is undertaking the development on 61 acres (25 ha) of land purchased from the Union Pacific Railroad in 1995. This is a major project for the Las Vegas Redevelopment Agency and the city. Projects that have been completed and are currently operating at Symphony Park are the Cleveland Clinic Lou Ruvo Center for Brain Health, The Smith Center for the Performing Arts and the Discovery Children's Museum.

Business and government leaders have begun working on a plan to expand downtown’s Las Vegas Medical District (LVMD) from its current 200 acres to at least 680 acres. While currently offering the largest concentration of health-care services in the Las Vegas valley, an expanded district would allow for additional health-care services and opportunities. Areas for planned expansion include the Charleston Boulevard corridor to Valley View Boulevard, along Martin L. King Boulevard and in Symphony Park. The centerpiece of this expanded district will be the 260,000-square-foot UNLV School of Medicine, which will include an educational building and library. The school was granted preliminary accreditation in late 2016 and can begin accepting students for its 2017 charter class.

Centered on Bonneville Avenue and Casino Center Boulevard, most of this area is filled with office and government buildings. With several court buildings located here, there are many judicial-related businesses such as law firms in the immediate area. The financial district is home to the Las Vegas City Hall building, the Lloyd D. George U.S. Courthouse and several bank buildings such as Bank of America. The Clark County Marriage Bureau is also located here at the Regional Justice Center.

Downtown is a hub for arts and culture in the metro area. The main venue for performing arts is the Art Deco-inspired Smith Center for the Performing Arts. In addition to The Smith Center and 18b, The Las Vegas Arts District, there are a number of educational facilities in the Cultural Corridor, located just north of the immediate downtown area. They include the Las Vegas Natural History Museum, the Neon Museum and Boneyard and the Old Las Vegas Mormon Fort State Historic Park. Also in this area are a number of neon signs from former Las Vegas casinos and landmarks, which have been restored and installed on several streets around downtown, as well as throughout the Fremont Street Experience. A famous neon icon of downtown Las Vegas is the Vegas Vic sign, also located at the Fremont Street Experience. 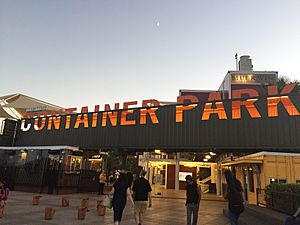 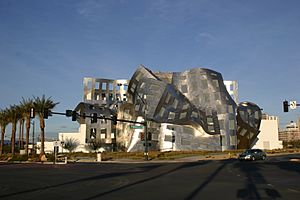 Several buildings of architectural significance exist downtown, although being founded in 1905, Las Vegas lacks the number of historical buildings of older cities. Exceptions include the Historic Fifth Street School, built in 1936 in the Spanish-mission style and listed in the National Register of Historic Places. Also listed is the Las Vegas Post Office and Courthouse, which currently serves as home to The Mob Museum and is one of the few historical neoclassical buildings in the city. Built in 1930, the Las Vegas Academy of International Studies and Performing Arts is the city's best example of Art Deco architecture. The Morelli House, built in 1959, is a notable mid-century modern design. The building that formerly housed the Las Vegas City Hall, and now is home to the corporate headquarters for the online retailer Zappos.com, is a notable example of 1970s modern architecture.

As Las Vegas boomed, more recent buildings tended to take inspiration from a variety of styles. The Clark County Government Center has a red sandstone exterior invoking a desert motif. The Smith Center for the Performing Arts, opened in 2012, is a more modern example of Art Deco design. Architect Frank Gehry designed the building for the Cleveland Clinic Lou Ruvo Center for Brain Health building in deconstructionist style. It was completed in 2010. 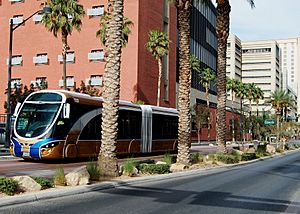 A bus rapid-transit link in Las Vegas called the Strip & Downtown Express (previously ACE Gold Line) with limited stops and frequent service was launched in March 2010. It connects downtown Las Vegas, the Strip and the Las Vegas Convention Center. It stops at the Bonneville Transit Center. Completed in 2012, the transit terminal serves as a central transfer point for downtown and features 16 vehicle bays for buses and 100 bike racks.

All content from Kiddle encyclopedia articles (including the article images and facts) can be freely used under Attribution-ShareAlike license, unless stated otherwise. Cite this article:
Downtown Las Vegas Facts for Kids. Kiddle Encyclopedia.