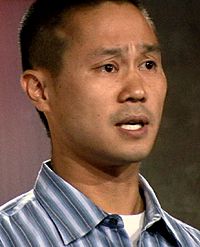 Hsieh co-founded the Internet advertising network LinkExchange, which he sold to Microsoft in 1998 for $265 million. He was born in Illinois, but raised in San Francisco, California and Las Vegas, Nevada.

On November 18, 2020, Hsieh was injured in a house fire in New London, Connecticut while visiting family for Thanksgiving. He was trapped in the basement during the fire. He died a week later on November 27 at a Bridgeport hospital from his injuries, aged 46.

All content from Kiddle encyclopedia articles (including the article images and facts) can be freely used under Attribution-ShareAlike license, unless stated otherwise. Cite this article:
Tony Hsieh Facts for Kids. Kiddle Encyclopedia.