Jean is a small commercial town in Clark County, Nevada, located approximately 12 mi (19 km) north of the Nevada-California state line along Interstate 15. Las Vegas is located about 30 mi (48 km) to the north. There are no residents of Jean, but many people in nearby communities like Primm and Sandy Valley have Jean listed in their mailing address because it is the location of the main post office for the 89019 ZIP code. Las Vegas Boulevard South ends about 2 mi (3.2 km) south of Jean, and it contiguously runs northbound past Las Vegas, ending near the I-15-US 93 Junction.

The area is mostly commercial with the exception of the post office and the courthouse, with commercial outlets such as the Gold Strike Hotel and Gambling Hall, the Jean Sport Aviation Center (used for activities like skydiving), Jean Conservation Camp (a minimum-security, all female Nevada Department of Corrections facility established in 1987) and a Nevada Highway Patrol (NHP) substation. The Nevada Landing Hotel and Casino was also located here but it was demolished in April 2008 and the sign was removed in 2011. The Jean Post Office is located on Las Vegas Boulevard in Jean. The Goodsprings Township Courthouse is also located in Jean.

The town was originally named Goodsprings Junction. On June 28, 1905 postmaster George Arthur Fayle renamed it Jean in honor of his wife. He also built the Pioneer Saloon in Goodsprings.

The median between the Nevada Landing Hotel and Casino and the Gold Strike Hotel and Gambling Hall was the scene of the worst single-vehicle accident in southern Nevada history at that time, when a van with 13 people flipped over and eight people were killed. The accident occurred in March 2000.

In the early 1970s, the Southern Nevada Timing Association, a Las Vegas car club, operated a 1/4 mile National Hot Rod Association sanctioned dragstrip on the old L.A. highway just south of town. This strip was opened due to the fact that the Stardust raceway had closed and there was no place to race legally. The local Lions Club and the Clark County Sheriff's Department also sanctioned drag racing here. The lengths of guard rail required by NHRA were installed on each side and a small observation tower was built. There were no timing or starting lights, all starts were by a flagger. The finish line was viewed by a club member who would go up on the track after the cars went by and stand in the winner's lane to show who won. His decision was final. Races were run every weekend unless the weather was bad or dangerous due to high winds. There were never any accidents here, which is amazing because it wasn't very wide and the roadbed was elevated about 4 ft (1.2 m) above the desert! Races were even run at night with the rental of a huge arc type spotlight that was projected down the track from the starting line. The track was closed when the Las Vegas Speedrome opened across from Nellis Air Force Base. That track is now named The Strip at Las Vegas. 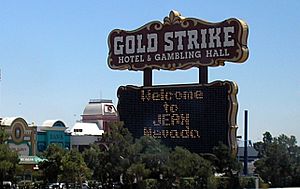 The Gold Strike Casino in Jean

The sign marking the location of the former Nevada Landing Casino

The area around Jean has been the site of several installation art exhibits, including Study for An End of the World, No. 2 in 1962 when Jean Tinguely and Niki de Saint Phalle blew up sculptures. In 1968, Michael Heizer created a zig-zag trench installation. In 2016 Ugo Rondinone built "Seven Magic Mountains."

Jean is located on a mountain pass, Jean Pass (south), west of the Jean Dry Lake basin. Sheep Mountain borders Jean to the east, southeast of Jean Dry Lake. Northwest of the pass lies the southeast foothills of the Bird Spring Range.

All content from Kiddle encyclopedia articles (including the article images and facts) can be freely used under Attribution-ShareAlike license, unless stated otherwise. Cite this article:
Jean, Nevada Facts for Kids. Kiddle Encyclopedia.