Goodsprings is an unincorporated community in Clark County, Nevada, United States. The population was 229 at the 2010 census.

According to the United States Census Bureau, the census-designated place (CDP) of Goodsprings has a total area of 1.5 square miles (3.9 km2), all of it land. 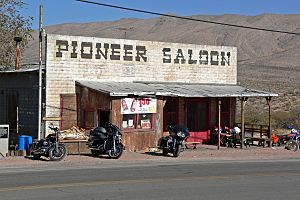 Named for Joseph Good, whose cattle frequented a spring nestled in the southeastern foothills of the Spring Mountains, Goodsprings was once the heart of the most productive mining districts in Clark County. Over the years, lead, silver, copper, zinc and gold have all been mined from this area. Before 1900, a small cluster of tent cabins and a mill were erected, and a post office Lincoln County established Goodsprings Township. In 1904, Salt Lake City mining interests platted the Goodsprings Township. Most early buildings in the town were constructed during the boom spurred by the railroad in 1910–1911.

After a number of moves, the current Goodsprings Schoolhouse was erected in 1913. Now on the National Register of Historic Places, it is the oldest school in Clark County that was built as a school and is still used as a school. Due to a shortage of funds, however, the Clark County School District is currently considering shutting the school down.

After World War I, mining slowed and families moved away. World War II created a second boom, but it too slowed after the war ended. The town's population has dwindled to approximately 200.

Goodsprings is currently the home of the Pioneer Saloon, considered to be one of the oldest saloons in Nevada (over 100 years old). The saloon houses a bullet hole on the side of the building and a coroner's letter describing how it was created. The saloon is said to be "haunted" by the victim's ghost by many. In addition, the Pioneer Saloon has a small memorial to both Clark Gable and Carole Lombard. Ms. Lombard's plane TWA Flight 3 crashed into nearby Potosi Mountain on January 16, 1942. The saloon and hotel were the centers of operations for the search. The accident resulted in her death.

There were 107 households out of which 20.6% had children under the age of 18 living with them, 45.8% were married couples living together, 11.2% had a female householder with no husband present, and 40.2% were non-families. 35.5% of all households were made up of individuals and 13.1% had someone living alone who was 65 years of age or older. The average household size was 2.17 and the average family size was 2.83.

All content from Kiddle encyclopedia articles (including the article images and facts) can be freely used under Attribution-ShareAlike license, unless stated otherwise. Cite this article:
Goodsprings, Nevada Facts for Kids. Kiddle Encyclopedia.