Summerlin is an affluent master-planned community in the Las Vegas Valley of Nevada. It lies at the edge of the Spring Mountains and Red Rock Canyon, on the western periphery of Las Vegas, Nevada in unincorporated Clark County. The community occupies 22,500 acres and includes a variety of land uses, including: residential, commercial, recreational, educational, medical, open space, and cultural. At the 2010 census, Summerlin's population was nearly 100,000, having risen from 59,000 in 2000.

With an average annual household income of $139,061, Summerlin is among the most affluent communities in Nevada. In 2014, Summerlin was named one of the "Best Places to Live in America" by Money.

Summerlin was named after Jean Amelia Summerlin, the mother of Howard R. Hughes Sr. The name "Summerlin" is often used to refer to the adjacent community of Summerlin South as well.

In 1952 Howard Robard Hughes, Jr. purchased 25,000 acres (10,000 ha) in Southern Nevada near Las Vegas and called the area "Husite." After Hughes died in 1976, his heirs felt the empty land had the potential to become a master-planned community. They changed the name from "Husite" to "Summerlin", after Hughes' paternal grandmother, Jean Amelia Summerlin, who was born on May 6, 1842 in Keosauqua, Van Buren County, Iowa and died on November 4, 1928 in Los Angeles, California. Summa Corporation was then organized to oversee the Hughes vast business empire and land holdings, including the large parcel of Southern Nevada desert that is the Summerlin of today.

Summa Corporation began construction of the Summerlin communities in 1990 but initiated planning and infrastructure construction – including Summerlin Parkway – in the late 1980s.

The community is unfolding in villages and today, 19 of 31 total villages are complete or are under development.

Summerlin offers homes in a variety of styles and prices to create a true multi-generational community. As of January 2009, Summerlin has approximately 9,000 acres (3,600 ha) available for development.

Summerlin has a hot desert climate (Köppen climate classification: BWh) typical of the Mojave Desert in which it lies. However, owing to its high elevation (ranging from 3,000 feet to 3,500 feet), Summerlin is always cooler than downtown Las Vegas and the Las Vegas Strip, and also receives slightly more precipitation. Clear skies and sunshine are abundant year-around, with 310 days of sunshine per year and exceptionally low dew points and low humidity in every season.

Winters in Summerlin are brief, with only December and January averaging daytime highs below 60 degrees. Temperatures drop to and below freezing on roughly half of all nights in December and January, making Summerlin the leading community in Las Vegas for reaching that benchmark. Snowfall is unusual, occurring once every several years, though several inches can fall at once during a major event.

Spring and fall are dominated by mild to warm days, with occasional surges of hot temperatures. Warming occurs rapidly beginning in March, and comfortably warm temperatures linger through the end of October and into early November. Daytime highs frequently range from the mid 60s to mid 80s, with overnight lows in the mid 40s and mid 50s.

Summers are characterized by lengthy stretches of hot days, with daytime temperatures exceeding 100 degrees on most days in July and August. Overnight lows often remain above 70, and can occasionally remain above 80 during the hottest days of the year.

Bicycle lanes are provided on most major roads in Summerlin. As the gateway into Red Rock Canyon National Conservation Area, Summerlin is frequented daily by scores of cyclists making their way to the Conservation Area and using the community’s extensive trail system.

Most Summerlin neighborhoods have small pocket parks that are maintained by one of the Summerlin associations which make up a system of almost 150 parks. Large community parks, which are available for use to all Summerlin residents, are located throughout Summerlin. As of 2008[update] there are nearly two dozen community parks that feature a variety of recreational amenities.

The following parks are owned, maintained and operated by The Summerlin Council.

The following pools are owned, maintained and operated by The Summerlin Council:

The following pool is maintained and operated by the City of Las Vegas: 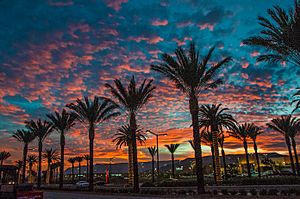 A summer sunset as seen from Downtown Summerlin

The Summerlin Trail System is currently more than 150 miles and connects neighborhoods to various amenities throughout the community. Upon completion, the trail system will be more than 200 miles long and will connect to more than 2,000 miles of regional trails, making it one of the most comprehensive and efficient trail systems in the southwest.

In 2008 the Howard Hughes Corporation received the American Trails Developer Award, given to developers in recognition of "quality, well designed multi-use trails systems that are integrated into private developments," for the Summerlin trail system.

All content from Kiddle encyclopedia articles (including the article images and facts) can be freely used under Attribution-ShareAlike license, unless stated otherwise. Cite this article:
Summerlin, Nevada Facts for Kids. Kiddle Encyclopedia.