The Spring Mountains are a mountain range of Southern Nevada in the United States, running generally northwest-southeast along the west side of Las Vegas and south to the border with California. Most land in the mountains is owned by the United States Forest Service and the Bureau of Land Management and managed as the Spring Mountains National Recreation Area within the Humboldt-Toiyabe National Forest and the Red Rock Canyon National Conservation Area.

The Spring Mountains range is named for the number of springs to be found, many of them in the recesses of Red Rock Canyon National Conservation Area, which is on the eastern side of the mountains. 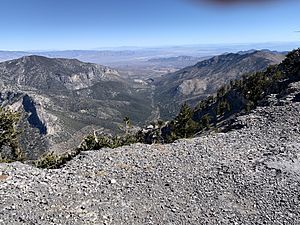 The Spring Mountains are a sky island ecosystem. With an area around 860 square miles (2,200 km2), and a vertical range of nearly 2 miles (3.2 km), the mountains encompass a wide variety of habitats, and the biological diversity is probably greater than anywhere else in Nevada; 37 species of trees are known (more than any other Nevadan range), and 600 species of vascular plants have been reported from the Red Rock Canyon National Conservation Area alone.

The bases of the mountains are part of the Mojave zone dominated by creosote bush and white bursage, then rising to a blackbush scrub zone, followed by a pygmy conifer zone with juniper, pinyon pine, and mountain mahogany, and topped by a montane zone with many species of conifers around Mt. Charleston and its connecting ridges.

Palmer's chipmunk is endemic to the Spring Mountains.

All content from Kiddle encyclopedia articles (including the article images and facts) can be freely used under Attribution-ShareAlike license, unless stated otherwise. Cite this article:
Spring Mountains Facts for Kids. Kiddle Encyclopedia.