Kids Encyclopedia Facts
Not to be confused with Mount Charleston or Charleston, Nevada.

Mount Charleston is an unincorporated town and census-designated place in Clark County, Nevada, United States. The population was 357 at the 2010 census.

Named for nearby Mount Charleston, the highest point in Clark County, the town is in a valley of the Spring Mountains to the northwest of Las Vegas, noted for its hiking trails, and for the Mount Charleston Lodge, a rustic hotel. At an elevation of approximately 7,500 feet, temperatures are much lower than in Las Vegas, which has an elevation of about 2,000 feet, making it a popular place for Las Vegans to vacation. The mean high temperature is 20.4 degrees (Fahrenheit) cooler than in Las Vegas. The area is also known as a vacation village for wealthy Las Vegas residents. 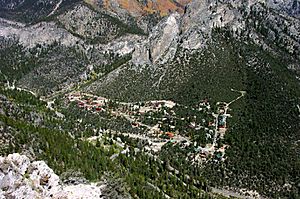 A view of Mt. Charleston

According to the United States Census Bureau, the census-designated place (CDP) of Mount Charleston (which may not coincide exactly with the town boundaries) has a total area of 29.4 square miles (76 km2), all of it land.

There were 133 households out of which 18.0% had children under the age of 18 living with them, 52.6% were married couples living together, 4.5% had a female householder with no husband present, and 39.8% were non-families. 29.3% of all households were made up of individuals and 2.3% had someone living alone who was 65 years of age or older. The average household size was 2.14 and the average family size was 2.69. 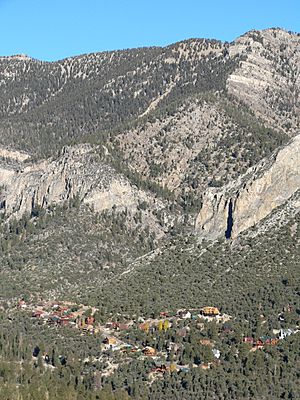 A view of some homes in Mt. Charleston.

Mount Charleston has a borderline Mediterranean/continental Mediterranean climate (Köppen Csb/Dsb), very similar to that of Flagstaff, Arizona though with rather less frequent and abundant monsoonal storms. In contrast to the arid climate of the rest of Nevada, precipitation as rain and melted snow is sufficient to support coniferous forests, with typically 11 inches or 0.28 metres of snow on the ground in February and a maximum monthly snowfall in a limited record of 89 inches or 2.26 metres in December 2010. Summers are markedly cooler than in the lower deserts, with the average July high being only 79.4 °F or 26.3 °C and minima often below 50 °F or 10 °C. On average over half of all nights are below 32 °F or 0 °C and in extreme cold waves temperatures may fall below 0 °F or −17.8 °C, with −15 °F (−26.1 °C) reached during the 1949 Western North American cold wave.

All content from Kiddle encyclopedia articles (including the article images and facts) can be freely used under Attribution-ShareAlike license, unless stated otherwise. Cite this article:
Mount Charleston, Nevada Facts for Kids. Kiddle Encyclopedia.