Populus fremontii, commonly known as Frémont's cottonwood, is a cottonwood (and thus a poplar) native to riparian zones of the Southwestern United States and northern through central Mexico. It is one of three species in Populus sect. Aigeiros. The tree was named after 19th century American explorer and pathfinder John C. Frémont. 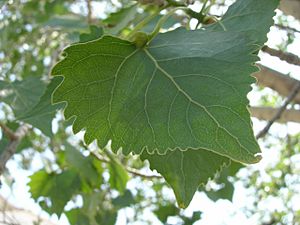 P. fremontii is a large tree growing from 12–35 m (39–115 ft) in height with a wide crown, with a trunk up to 1.5 metres (4 ft 11 in) in diameter. The bark is smooth when young, becoming deeply fissured with whitish cracked bark on old trees.

The 3–7 centimetres (1.2–2.8 in) long leaves, are cordate (heart-shaped) with an elongate tip, with white veins and coarse crenate teeth along the sides, glabrous to hairy, and often stained with milky resin. Autumn colors occur from October–November, mainly a bright yellow, also orange, rarely red.

The inflorescence consists of a long drooping catkin, which blooms from March to April. The fruit is a wind dispersed achene, that appears to look like patches of cotton hanging from limbs, thus the name cottonwood.

Two subspecies are currently recognized. Some confusion due to hybridization with a Rio Grande subspecies of Populus deltoides subsp. wislizeni had originally placed this eastern cottonwood subspecies as a P. fremontii subspecies, but it was removed in 1977.

P. fremontii is cultivated as an ornamental tree and riparian zone restoration tree. It is used in planting for: wildlife food and shelter habitats and ecological restoration; larger native plant and wildlife gardens and natural landscaping projects, windbreaks, erosion control, and shade for recreation facilities, parks, and livestock.

Frémont's cottonwood was used in the past by settlers and ranchers for fuel and fence posts.

Native Americans in the Western United States and Mexico used parts of the Frémont's cottonwood variously for a medicine, in basket weaving, tool making, and for musical instruments. The inner bark of Frémont's cottonwood contains vitamin C and was chewed as an antiscorbutic, or treatment for vitamin C deficiency. The bark and leaves could be used to make poultices to reduce inflammation or to treat wounds.

The Pima people of southern Arizona and northern Mexico lived along Sonoran Desert watercourses and used twigs from the tree in the fine and intricate baskets they wove. The Cahuilla people of southern California used the tree's wood for tool making, the Pueblo peoples for drums, and the Lower Colorado River Quechan people in ritual cremations. The Hopi of Northeastern Arizona carve the root of the cottonwood to create kachina dolls.

All content from Kiddle encyclopedia articles (including the article images and facts) can be freely used under Attribution-ShareAlike license, unless stated otherwise. Cite this article:
Frémont's cottonwood Facts for Kids. Kiddle Encyclopedia.