Sloan Canyon National Conservation Area is a National Conservation Area (NCA) administered by the United States Bureau of Land Management (BLM). It includes the Sloan Petroglyph Site which was listed on the National Register of Historic Places on December 19, 1978. It is located south of Las Vegas, Nevada, access is available from Las Vegas Boulevard, near the Del Webb Anthem development in Henderson. Sloan Canyon NCA protects 48,438 acres (19,602 ha). 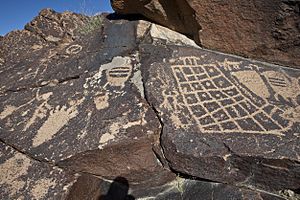 Sloan Canyon contains a great many petroglyphs and has been called the Sistine Chapel of Native American rock art due to their size and significance. Archaeologists believe the more than 300 rock art panels with 1,700 individual design elements were created by native cultures from the Archaic to historic eras.

The BLM currently maintains a policy of not publicizing the exact location of the petroglyphs due to recent problems with vandalism. Access to the NCA is further hampered by the rapid development of private land and to ongoing conflicts over land use and zoning.

Sloan Canyon NCA is (as of November 2006) closed to camping, shooting and offroad vehicle access, due to dumping and vandalism. Hiking, biking and horseback riding are encouraged on existing roads and trails. The BLM asks that you respect the rock art, and be a responsible visitor.

The North McCullough Wilderness Area which covers the northern part of the McCullough Range is contained within the boundaries of the NCA.

All content from Kiddle encyclopedia articles (including the article images and facts) can be freely used under Attribution-ShareAlike license, unless stated otherwise. Cite this article:
Sloan Canyon National Conservation Area Facts for Kids. Kiddle Encyclopedia.