Kids Encyclopedia Facts
This page is about the town in Clark County. For the valley, see Spring Valley (White Pine County, Nevada).

Spring Valley is an unincorporated town and census-designated place in Clark County, Nevada, United States, located 2 miles (3 km) west of the Las Vegas Strip. The population was 215,597 at the 2020 census. Spring Valley was formed in May 1981.

After purchasing the land occupied by Stardust International Raceway, Pardee Homes began developing a master-planned housing community called Spring Valley southwest of Las Vegas in the mid-1970s. By 1981, residents grouped together to solicit the Clark County Commission to create an unincorporated town, which it did that May. The town originally encompassed 1 square mile (3 km2), but now occupies much of the southwest quarter of the Las Vegas Valley, totaling 33.4 square miles (90 km2).

The predominant boundaries of Spring Valley are Sahara Avenue on the north, Decatur Boulevard on the east, Warm Springs Road on the south, and Hualapai Way on the west.

A large park, Desert Breeze Park, is located in the north-central part of the town.

Its municipal government is the Clark County Commission, which has seven members from across Southern Nevada (and none of whom reside in Spring Valley as of 2006). A five-member Town Advisory Board offers advisory opinions on zoning and business matters to the commission, but the commission is not obligated to respond or be held to those suggestions.

According to the United States Census Bureau, the census-designated place (CDP) of Spring Valley (which may not exactly coincide with the town boundaries) has a total area of 33.4 sq mi (87 km2), all of it land. 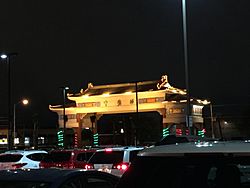 Along Spring Mountain Road in Spring Valley is a series of strip malls with ethnic Chinese and other pan-Asian businesses, with the original called Chinatown Plaza. Historically, the strip mall was conceived by Taiwanese American JHK Investment Group, Inc. and opened in 1995. Nevada Governor Kenny Guinn officially designated the area as Chinatown in October 1999 and it continues to grow as the Asian population in Las Vegas expands rapidly. The Chinatown area has gained much popularity, receiving national attention in a 2004 article by The Wall Street Journal (See Further Reading below for the specific citation). Huffington Post classifies Las Vegas Chinatown along with Atlanta-Chamblee, Dallas-Richardson, and North Miami Beach as a "modern" styled Chinatown, that contrasts with the historic core Chinatowns like New York and San Francisco. The Chinatown is pan-Asian in nature instead of being completely Chinese according to the previous source. The official website for the Chinatown Plaza indicates that Spring Mountain Road is the general corridor for the neighborhood.

The history of Chinese population in the Las Vegas Valley shows that the Chinese population remained small throughout most of its history. As a result, a Chinatown could only be created with initiative from entrepreneurs that would in essence fabricate a scenario that came naturally in other large cities that have historically important Chinatowns. According to Tsui in her book, Las Vegas's Chinese population boomed starting from the 1960s and by the 1990s, the Chinese population grew to 15,000 with the majority working in the casino industry. Even as the population grew, the "Chinatown experiment" could not rely on the local Chinese population to create it, but relied on a label on the plaza itself before people knew it was "Chinatown". As a saleswoman visiting the Chinatown answered "How do I know this is Chinatown?" Her answer was "Because it says so right on the arch, in Chinese characters (Zhongguo Cheng)"

According to Tsui's book, Senator Harry Reid "... ordered a sign to be put up for Chinatown [along Interstate 15]..." but was taken down by the order of the governor of Nevada Bob Miller. In 1996, the Clark County, Nevada designated the area as "Chinatown".

All public schools within Spring Valley are part of the Clark County School District.

Spring Valley has a public library, a branch of the Las Vegas-Clark County Library District.

All content from Kiddle encyclopedia articles (including the article images and facts) can be freely used under Attribution-ShareAlike license, unless stated otherwise. Cite this article:
Spring Valley, Nevada Facts for Kids. Kiddle Encyclopedia.