The national monument is located in the Upper Las Vegas Wash and protects part of the Tule Springs. The wash area also includes several patches of the rare Las Vegas bear poppy. The land was designated after a local campaign to permanently protect the landscape as a national monument.

Fossils found at the site include Columbian mammoths, camelops and American lions, and range from 7,000 to 250,000 years old.

The Tule Springs Fossil Beds passed both houses of Congress in December 2014 and signed into law by President Barack Obama on December 19, 2014 under Section 3092(a) of the National Defense Authorization Act for 2015. 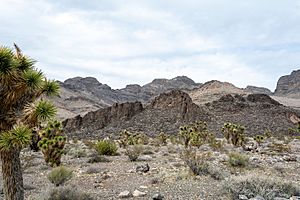 All content from Kiddle encyclopedia articles (including the article images and facts) can be freely used under Attribution-ShareAlike license, unless stated otherwise. Cite this article:
Tule Springs Fossil Beds National Monument Facts for Kids. Kiddle Encyclopedia.