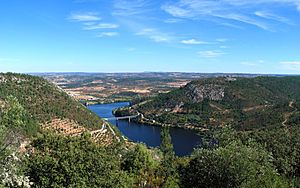 The Tagus near Vila Velha de Ródão, close to the Spanish border 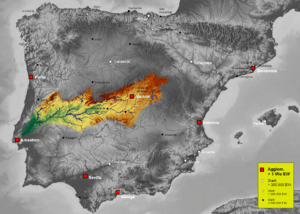 Map of the Tagus river Basin

It drains an area of 80,100 square kilometers (30,927 sq mi) (the second largest in the Iberian peninsula after the Douro). The Tagus is highly utilized for most of its course. Several dams and diversions supply drinking water to most of central Spain, including Madrid, and Portugal, while dozens of hydroelectric stations create power.

Between dams it follows a very constricted course, but after Almourol it enters a vast alluvial valley prone to flooding. At its mouth is a large estuary on which the port city of Lisbon is situated.

The source of the Tagus is the Fuente de García, in the Frías de Albarracín municipal term, Montes Universales, Sistema Ibérico, Sierra de Albarracín Comarca. All its major tributaries enter the Tagus from the right (north) bank. The main cities it passes through are Aranjuez, Toledo, Talavera de la Reina and Alcántara in Spain, and Abrantes, Santarém, Almada and Lisbon in Portugal.

All content from Kiddle encyclopedia articles (including the article images and facts) can be freely used under Attribution-ShareAlike license, unless stated otherwise. Cite this article:
Tagus Facts for Kids. Kiddle Encyclopedia.