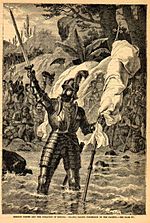 Vasco Núñez de Balboa (1475–1519) was a Spanish explorer and conquistador. He was the first European to see the Pacific Ocean.

Balboa was one of those who established the settlement at Darién in what is now Panama. He was elected mayor, then governor.

In 1513, he claimed the Pacific Ocean and all of its shores for Spain. He was searching for gold at the time.

In Darién, he had been replaced by a new governor, Pedro Arias Dávila. On orders from Spain, Dávila was to investigate Balboa. On Balboa's return to Darién in 1519, Dávila had him placed on trial, then executed for treason.

Balboa was born in Jerez de los Caballeros, Spain. He was a descendant of the Lord mason of the castle of Balboa, on the borders of León and Galicia. During his adolescence, he served as a page and squire to Don Pedro de Portocarrero, lord of Moguer.

In 1501 he undertook his first trip with the expedition of Rodrigo de Bastidas through the Caribbean islands that belong to present-day Colombia (Santa Marta, Cartagena and the Gulf of Urabá or Darién), during which the coastline of Colombia and Panama was explored. He then tried to settle in Hispaniola and was a pig farmer for a while, but wasn't good at it and lost his money.

In 1508, Alonso de Ojeda and Diego de Nicuesa created two new governorates in the lands between Cabo de la Vela (Venezuela) and Cabo de Gracias a Dios (Nicaragua). The government of the east, which included the coast of Venezuela and Colombia, was called Nueva Andalucía, and the one located to the west (Panama, Costa Rica and Nicaragua), Castilla del Oro.

In 1509 Vasco Núñez de Balboa, was a stowaway on a boat with his dog trying to escape the people who he owed money. The boats expedition was commanded by Martín Fernández de Enciso and he went to meet Alonso de Ojeda, who had founded San Sebastián de Urabá in Nueva Andalucía, leaving a group of men in command headed by Francisco Pizarro.

Shortly after this Balboa was discovered onboard and but he became popular with his shipmates thanks to his charisma and his knowledge of those lands, acquired in the Bastidas expedition.

Later, the regiment moved to Darién, where Núñez de Balboa founded the first permanent establishment in continental America, Santa María de la Antigua del Darién in 1510. He was elected mayor and he sent emissaries to Diego de Nicuesa inviting him to establish himself as governor in Antigua. Nicuesa considered this an intrusion and led a punishment mission, but Balboa defeated him, and Nicuesa was left to his fate on a ship that was lost at sea. 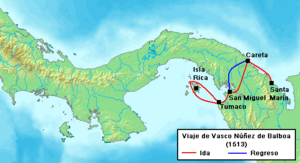 After the arrival of Pedrarias Dávila, the new governor, Núñez de Balboa undertook the exploration of the Pacific coast.

Upon hearing that his father-in-law was going to be replaced, he returned to Acla to support him, but Pedrarias Dávila accused him of conspiring against the Crown, and the explorer was tried, sentenced to death and executed in Acla. 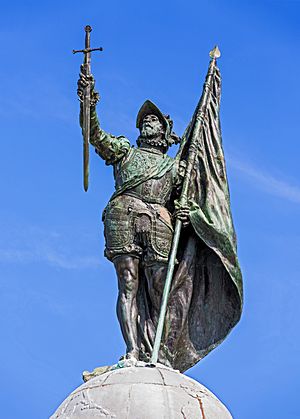 All content from Kiddle encyclopedia articles (including the article images and facts) can be freely used under Attribution-ShareAlike license, unless stated otherwise. Cite this article:
Vasco Núñez de Balboa Facts for Kids. Kiddle Encyclopedia.