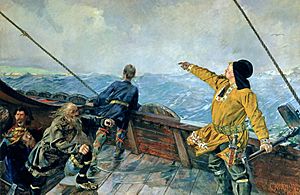 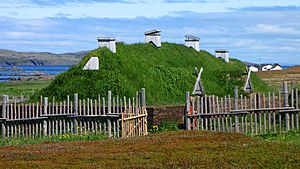 Recreated Norse long house, L'Anse aux Meadows, Newfoundland and Labrador, Canada. The site was listed by UNESCO as a World Heritage Site in 1978. 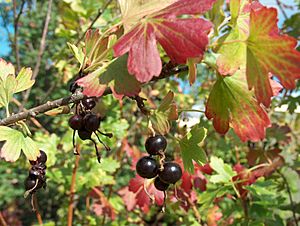 The berries of blackcurrant

Vinland is an area of the coast of North America, which Leif Erikson discovered around AD 1000. The name appears in the Vinland Sagas. It probably describes Newfoundland and the Gulf of Saint Lawrence, as far north as New Brunswick.

What the name refers to

The first reference outside the Sagas is that of Adam of Bremen (1076) in his Gesta Hammaburgensis. He wrote: "Praeterea unam adhuc insulam recitavit a multis in eo repertam occeano, quae dicitur Winland, eo quod ibi vites sponte nascantur, vinum optimum ferentes. Nam et fruges ibi non seminatas habundare, non fabulosa opinione, sed certa comperimus relatione Danorum." This can be translated as: "In addition [the king of the Danes] reports on one of many islands in the ocean, which is called Winland, because vines grow there wild, which produce wine. That there are fruit in abundance which have non been [planted], we have not known from an incredible rumour, but from the report of the Danes."

All content from Kiddle encyclopedia articles (including the article images and facts) can be freely used under Attribution-ShareAlike license, unless stated otherwise. Cite this article:
Vinland Facts for Kids. Kiddle Encyclopedia.