John Cabot (Italian: Giovanni Caboto; c. 1450 – c. 1500) was a Venetian navigator and explorer who in 1497, sailing westward from England in his ship Matthew, he discovered what he thought was Asia. In fact he discovered Canada, which he claimed for King Henry VII. King Henry VII, paid him money to "seek out, discover, and find" new lands for England. This was the first European exploration of coastal North America since the Norse visits to Vinland in the eleventh century.

For the 500th-anniversary celebrations, the governments of Canada and the United Kingdom designated Cape Bonavista in Newfoundland as the "official" landing place. Here in 1997 Queen Elizabeth II, along with members of the Italian and Canadian governments, greeted the replica Matthew of Bristol, following its celebratory crossing of the Atlantic. 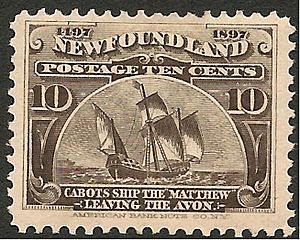 Giovanni Caboto (his Italian name) was probably born in Genoa about 1450. He was the son of Giulio Caboto and his wife and he had a brother Piero. Gaeta (in the Province of Latina) and Castiglione Chiavarese (in the Province of Genoa) have both been proposed as birthplaces.

Most of his early life was not written about and so much of his history is missing.

When he was still young his family moved to Venice. Venice was a larger seaport than Genoa and at the time was the most important in all of Europe. Growing up there he learned a great deal about sailing and the sea. Cabot became an excellent sailor. His father was a trader and taught Giovanni (John) all about the spice trade.

Cabot married a young woman named Mattea (female form of the name Matthew) about 1482. They had three sons who all sailed with their father. By this time he was a merchant and traveled widely. He and his family moved to the port of Bristol, England about 1490.

Cabot was described as having one "little ship", of 50 tons burden, called the Matthew of Bristol (according to the 1565 chronicle). It was said to be laden with sufficient supplies for "seven or eight months". The ship departed in May 1497 with a crew of 18 to 20 men. 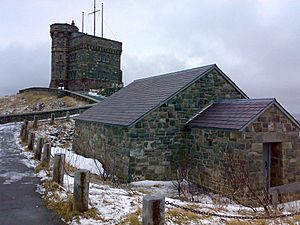 Cabot Tower in St. John's situated on Signal Hill. Construction of the tower began in 1898 to commemorate the 400th anniversary of John Cabot's discovery of Newfoundland, and Queen Victoria's Diamond Jubilee

He set sail from Bristol. Cabot sailed across the North Atlantic in about seven weeks. During the voyage they saw enormous quantities of Cod fish. Fishermen would soon follow to take advantage of the rich fishing of the Grand Banks of Newfoundland.

It is stated that the expedition made no contact with any native people; crew found the remains of a fire, a human trail, nets and a wooden tool. The crew appeared to have remained on land just long enough to take on fresh water; they also raised the Venetian and Papal banners, claiming the land for the King of England and recognising the religious authority of the Roman Catholic Church. After this landing, Cabot spent some weeks discovering the coast.

On return to Bristol, Cabot rode to London to report to the King. On 10 August 1497, he was given a reward of £10 – equivalent to about two years pay for an ordinary labourer or craftsman. 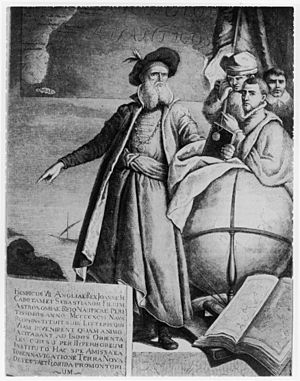 Once Henry's throne was secure, he gave more thought to Cabot. On 26 September, just a few days after the collapse of the revolt, the King made an award of £2 to Cabot. In December 1497 the explorer was awarded a pension of £20 per year - equivalent to about four years' pay for an ordinary labourer or craftsman. On February 3, 1498 he was given new orders to help him prepare for a second expedition.

Cabot departed with a fleet of five ships from Bristol at the beginning of May 1498, one of which had been prepared by the King. Some of the ships were said to be carrying merchandise, including cloth, caps, lace points and other "trifles". This suggests that Cabot intended to engage in trade on this expedition.

The Spanish envoy in London reported in July that one of the ships had been caught in a storm and been forced to land in Ireland, but that Cabot and the other four ships had continued on.

For centuries no other records were found that relate to this expedition; it was long believed that Cabot and his fleet were lost at sea. It is not known if Cabot died during the voyage, or returned safely and died shortly after.

All content from Kiddle encyclopedia articles (including the article images and facts) can be freely used under Attribution-ShareAlike license, unless stated otherwise. Cite this article:
John Cabot Facts for Kids. Kiddle Encyclopedia.