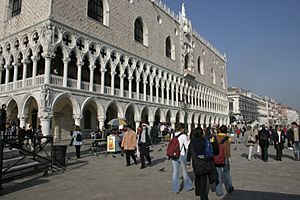 The Doge's Palace (Italian: Palazzo Ducale) is a gothic palace in Venice, northern Italy. The palace was the home of the Doge of Venice, the ruler of the Republic of Venice In 1923 the palace became a museum, one of 11 museums run by the Fondazione Musei Civici di Venezia. In 2010 it was visited by 1,358,186 people.

In 810, Doge Angelo Partecipazio moved the government from the island of Malamocco to the Rialto. The first palace was destroyed by a fire in the 10th century, which is in the 900s. A second palace was started by Doge Sebastiano Ziani (1172–1178). There are still parts of this building which can be seen on the ground floor, including stone wall bases and some brick paving. As Venice grew, the palace needed to be rebuilt to meet new demands. For example, changes in the political structure meant there were many more members of the Great Council.

This third palace, in Gothic style, was started about 1340. The first section was on the side facing the lagoon. In 1424 Doge Francesco Foscari built the wing overlooking the Piazzetta. This new building was for the law-courts, with a ground floor arcade on the outside. The first floor had open loggias running along the facade. When the Porta della Carta was built in 1442, it made an internal courtyard.

In 1483, a fire destroyed the Doge's residence which was in the part of the palace overlooking the canal. Architect Antonio Rizzo used the new Renaissance style for the building's architecture. A new building was built alongside the canal, stretching from the ponte della Canonica to the Ponte della Paglia. The official rooms of the government had art works specially made by Vittore Carpaccio, Giorgione, Alvise Vivarini and Giovanni Bellini. A fire in 1547 destroyed some rooms on the second floor. A big fire in 1577 destroyed the Scrutinio Room and the Great Council Chamber. Art work by Gentile da Fabriano, Pisanello, Alvise Vivarini, Vittore Carpaccio, Giovanni Bellini, Pordenone, and Titian were also lost in the fire. The palace was rebuilt in the original gothic style. Some classical features were added, such as the Bridge of Sighs joining the prison to the palace.

The palace was the home of the government of the Republic of Venice until the Napoleonic occupation of the city in 1797. Venice was ruled by the French, then Austria, and in 1866 it became part of Italy. During this time, the palace was used for various government offices, the Biblioteca Marciana and other important cultural institutions within the city.

By the end of the 19th century, the building was showing clear signs of decay. The Italian government spent a lot of money to repair the building. All public offices were moved elsewhere, except the State Office for the protection of historical Monuments, which is still housed at the palace's loggia floor. In 1923, the municipality of Venice set up the palace as a museum. In 1996, the Doge’s Palace has been part of the Venetian museums network, which is run by the Fondazione Musei Civici di Venezia since 2008. 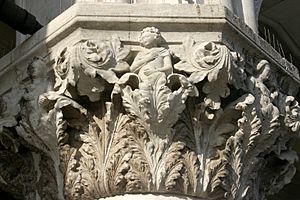 Detail on one of the Gothic capitals

The oldest part of the palace is the facade overlooking the lagoon. The corners of the building have 14th century sculptures by Filippo Calendario, Raverti and Antonio Bregno. The ground floor arcade and the loggia has 14th and 15th century capitals. Some of these are copies made during the 19th century. 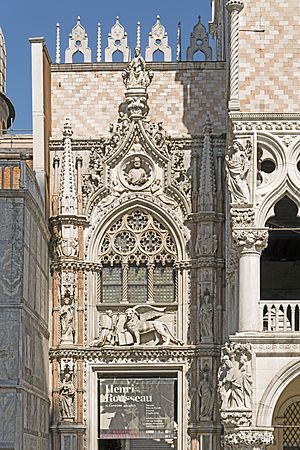 The Porta della Carta, was the grand entrance to the building. The gateway was built and decorated by Giovanni and Bartolomeo Bon from 1438–1442. The name Porta della Carta could be because this was the area where public scribes set up their desks, or from the cartabum, where all the important government documents were kept. On either side of the gateway are two gothic towers, with sculptures of the Cardinal Virtues. On the top is a bust of Saint Mark, and over him is a statue of Justice with her symbols of sword and scales. In the space above the cornice, there is a sculpture of the Doge Francesco Foscari kneeling before the St. Mark's Lion. This was made in the 19th century by Luigi Ferrrari, to replace the original destroyed in 1797.

The public entrance to the Doge's Palace is now through the Porta del Frumento, in the waterfront side of the building.

The north side of the courtyard is made by the palace and St. Mark’s Basilica, which used to be the Doge’s chapel. At the center of the courtyard are two well-heads built in the mid-16th century.

In 1485 a grand staircase was built within the courtyard. Linked to the Porta della Carta, it created a monumental approach from the Piazza into the heart of the building. Since 1567, the Giants’ Staircase has been guarded by Sansovino’s two huge statues of Mars and Neptune. These show Venice’s power by land and by sea, and therefore the reason for its name. Members of the Senate gathered before government meetings in the Senator’s Courtyard, to the right of the Giants’ Staircase.

All content from Kiddle encyclopedia articles (including the article images and facts) can be freely used under Attribution-ShareAlike license, unless stated otherwise. Cite this article:
Doge's Palace, Venice Facts for Kids. Kiddle Encyclopedia.