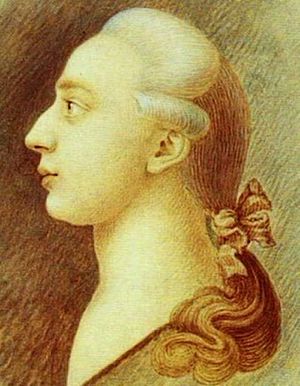 Giacomo Girolamo Casanova (2 April 1725—4 June 1798) was a famous Venetian adventurer and writer. He was born in Venice. He is best known for having had many affairs with women. He died in Dux, Bohemia, (now Duchcov, Czech Republic).

All content from Kiddle encyclopedia articles (including the article images and facts) can be freely used under Attribution-ShareAlike license, unless stated otherwise. Cite this article:
Giacomo Casanova Facts for Kids. Kiddle Encyclopedia.