Cabot is a council ward that covers the centre of Bristol. It gets its name from the Cabot Tower – a memorial tower on Brandon Hill that was built to commemorate John Cabot's voyage and "discovery" of North America. 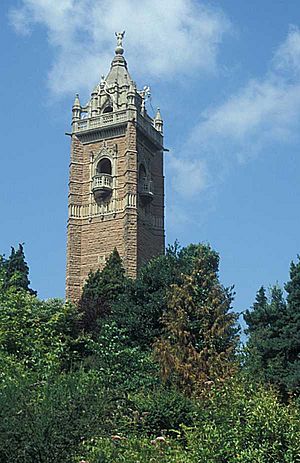 This ward contains the whole of the medieval city and many of the oldest surviving buildings. Cabot includes Bristol's Docks, the City Centre and the University of Bristol. Cabot has at least 17 churches, a cathedral, a synagogue, four museums, three hospitals, two theatres, two concert halls, and art galleries and cinemas.

The area that comprises Brandon Hill, Park St, the Triangle, and the area between Park Row and the Hippodrome has been promoted under the name "The West End". Spike Island is the land between the Floating Harbour and the river Avon; from the digging of the "New Cut" until the Bathurst locks were sealed up it was literally an island.

The central area of the city of Bristol, South West England, is the area south of the central ring road and north of the Floating Harbour, bordered north by St Pauls and Easton, east by Temple Meads and Redcliffe, and west by Clifton and Canon's Marsh. It is contained entirely within the Council ward of Cabot.

Panorama of the City Centre, as viewed from the University. 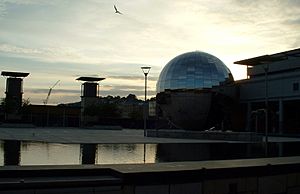 Canon's Wharf was once one of the busiest quays in the docks, with its own branch of the Bristol Harbour Railway, cranes and a goods shed. The area was also the location of the city gas works. With the decline of industry throughout the 20th century Canon's Marsh was cleared to make way for urban renewal. Due to pollution, however, the gas works remained derelict for several years. The area is now the location of At-Bristol, the South West offices of Lloyds TSB bank, a campus of City of Bristol College and several bars, restaurants, apartment buildings and offices.

Kingsdown is a mainly residential area of Bristol, located to the north of the city centre and south of Cotham. It lies within the Cabot council ward.

A small portion of the Redcliffe area lies within the Cabot ward. Most of it however lies in the Lawrence Hill ward.

Spike Island is the narrow strip of land between the Floating Harbour to the north and the tidal New Cut of the River Avon to the south, from the dock entrance to the west to Bathurst Basin in the east.

Tyndall's Park is an area to the east of Clifton. It contains the main precinct of the University of Bristol, Bristol Grammar School and the BBC Bristol studios.

All content from Kiddle encyclopedia articles (including the article images and facts) can be freely used under Attribution-ShareAlike license, unless stated otherwise. Cite this article:
Cabot, Bristol Facts for Kids. Kiddle Encyclopedia.