Hotwells is a district of the English port city of Bristol. It is located to the south of and below the high ground of Clifton, and directly to the north of the Floating Harbour. The southern entrance to the Avon Gorge, which connects the docks to the sea, lies at the western end of Hotwells. The eastern end of the area is at the roundabout where Jacobs Well Road meets Hotwell Road. Hotwells is split between the city wards of Clifton, and Hotwells and Harbourside.

Hotwells is approximately 1 mile (1.6 km) west of Bristol city centre lying just north of the Floating Harbour and the River Avon. To the north and some 300 feet (91 m) higher is the suburb of Clifton. Much of the built up area was originally salt marsh known as Rownham Mead. Nearly half of Rownham Mead was excavated in the early 19th century to construct the Cumberland Basin, part of the entrance lock system to the city docks. The west of the area marks the beginning of the Portway road which connects Bristol to Avonmouth, passing under the Clifton Suspension Bridge which lies about 0.25 miles (0.40 km) north of Hotwells.

Hotwells takes its name from the hot springs which bubble up through the rocks of the Avon Gorge underneath the Clifton Suspension Bridge. The springs were documented in 1480 by William Worcester, the 15th century chronicler and antiquary. He described the waters as being milky and as warm as those at Bath. In 1692 the Society of Merchant Venturers leased the springs and a pump room was built. The pump room of 1696 was demolished and replaced by Hotwells House in 1816 which was itself demolished when the river was widened in 1867. In the Georgian era, Hotwells was developed as a spa including the building of Dowry Square in an attempt to compete with Bath. Many visitors came, including the diarist John Evelyn and the travel writer Celia Fiennes, who hunted for Bristol Diamonds in the gorge. The Jacobs Well Theatre, built in 1729, provided entertainment for visitors and Bristolians. Despite this, Hotwells never attained the same status as Bath, and eventually the waters were found to be polluted. A new pump room was built in 1822, but were demolished in 1867 to allow for widening of the River Avon.

In the 20th century much of the housing in Hotwells was in a poor state of repair, but since the 1970s there has been refurbishment of the older Georgian properties and new housing built on derelict dockside wharves and along the Hotwell Road.

Grenville Chapel, a Methodist church, was opened in 1839 in an Early English Style building. For many years it was used as a garage and is now housing association managed flats.

Hotwells has several of Bristol's Grade II* listed buildings, including the Church of Holy Trinity, designed by Cockrell, and Albemarle Row, a Georgian terrace. Also listed is the Pump House, formerly the power plant for Bristol Harbour's bridges and other machinery, now a public house. 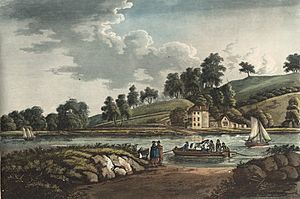 Crossing the Avon to Hotwells in 1797, by John Hassell

Towards the end of the 19th century, the western end of the district was the location of a terminus of a Bristol Tramways route, Hotwells railway station was the city terminus of the Bristol Port Railway and Pier line to Avonmouth, the lower terminus of the Clifton Rocks Railway, the Rownham Ferry which crossed the River Avon to Bower Ashton, the locks giving access to the Floating Harbour, and the landing stages used by passenger steamers. In the 1920s, the A4 Portway Road was driven through the Avon Gorge to provide better access from the city to Avonmouth Docks, in the process removing all signs of the Bristol Port Railway and Pier's station. Since the 1960s, the western end of Hotwells has been dominated by a flyover complex, which enables traffic from the city centre and the A4 Portway to cross the river and harbour entrance locks to access the south west of the city.

Public transport links include buses serving Weston-super-Mare, Clevedon and Portishead which pass through the area. There is a ferry service to the city centre and Temple Meads railway station.

Hotwells and Cliftonwood Community Association (HCCA), is a registered charity run by volunteers to improve the quality of life for those who live and work locally. For many years HCCA ran the Hope Centre in the listed Georgian Hope Chapel, which provided a base for community groups and offered a programme of arts events. The Hope Centre closed in 2001 following a loss of funding and the lease was surrendered to the owners, the Congregational Federation.

The area is served by two schools, Hotwells Primary School and St George C of E Primary School. The latter has been under threat of closure by Bristol City Council, but is now to be re-evaluated in 2013. The nearest secondary schools are Ashton Park School, Cotham School and Bristol Cathedral Choir School.

All content from Kiddle encyclopedia articles (including the article images and facts) can be freely used under Attribution-ShareAlike license, unless stated otherwise. Cite this article:
Hotwells Facts for Kids. Kiddle Encyclopedia.