Kids Encyclopedia Facts
This page is about the central area of Bristol. For the public open space and transport interchange, see The Centre, Bristol.

Bristol City Centre is the commercial, cultural and business centre of Bristol, England. It is the area north of the New Cut of the River Avon, bounded by Clifton Wood and Clifton to the north-west, Kingsdown and Cotham to the north, and St Pauls, Lawrence Hill and St Phillip's Marsh to the east. The Bristol Royal Infirmary, Bristol Royal Hospital for Children, the BBC, the main campus of the University of Bristol, the Crown and Magistrate's Courts, Temple Meads railway station, Bristol bus station, the Park Street, Broadmead and Cabot Circus shopping areas together with numerous music venues, theatres and restaurants are located in this area. The area consists of the council wards of Central, Hotwells & Harbourside, and part of Lawrence Hill.

The historic heart of the city was immediately north of Bristol Bridge, between the River Frome and the River Avon, in the area of High Street, Broad Street and Corn Street. The eastern part of this area, between the bridge and Bristol Castle, was destroyed in 1940 during the Bristol Blitz, but the western part largely survived, and contains many historic buildings.

After the war, the blitzed area was redeveloped, and Castle Park was also created.

The course of the River Frome, immediately to the west of the historic centre, was covered over in stages, in the second half of the 19th century. The area became the hub of the city's tramway network, and was known as the Tramways Centre. It was so called long after the last trams left in 1939, but is now known simply as the Centre.

Between 1936 and 1938, the Centre was enlarged when more of the River Frome, between Broad Quay and St Augustine's Parade, was covered in, making way for an inner ring road. These planning decisions are beginning to be reversed, for example, the ring road is no longer circular, as the stretch through Queen Square has been closed and returned to its use as a public park. St Augustine's Parade is also becoming less car oriented, as roads have been narrowed, turned into bus lanes or closed altogether. The Centre was redeveloped for the millennium, with fountains and a cascade being erected. 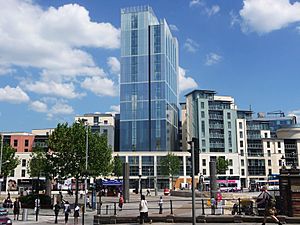 The area northeast of the historic area, around Broadmead, was redeveloped after the war despite overwhelming public opinion against it, and the streets and shops in Broadmead became the main shopping district of the city. Like most 1950s buildings in Britain, affordable but architecturally uninteresting utilitarian buildings form the bulk of the Broadmead area.

In the 1980s, some of these were demolished to make way for the Galleries shopping centre, which is a three level covered street. In 2008, the shopping area was extended over the central ring road to produce a new shopping centre, Cabot Circus, which opened in September 2008. 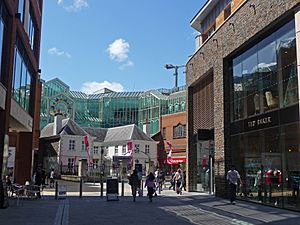 The North Entrance to the Galleries Shopping Centre, Broadmead

The harbourside has been regenerated in the 1990s and 2000s, with the refurbishment of warehouses as bars, restaurants, the Watershed Media Centre and the Arnolfini art gallery, as well as the creation of At-Bristol. 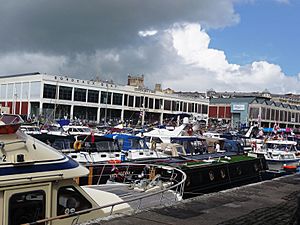 Old City is the peninsular area to the north east of St Augustine's Reach, It contains St Nicolas Market, Queen Square, King Street and many bars and restaurants, it is a key part of Bristol's night life.

All content from Kiddle encyclopedia articles (including the article images and facts) can be freely used under Attribution-ShareAlike license, unless stated otherwise. Cite this article:
Bristol city centre Facts for Kids. Kiddle Encyclopedia.