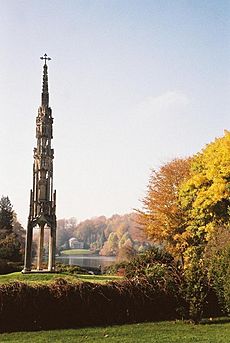 The cross is now at the entrance to the gardens of the Stourhead estate.

Bristol High Cross was a monumental market cross erected in 1373 in the centre of Bristol. It was built in Decorated Gothic style on the site of an earlier Anglo-Saxon cross, to commemorate the granting of a charter by Edward III to make Bristol a county, separate from Somerset and Gloucestershire. It was moved to the Stourhead Estate in 1765. 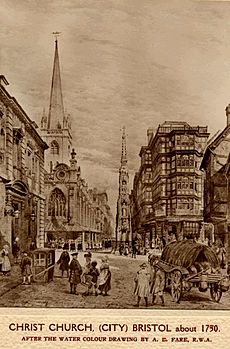 Black and white sketch from c.1730 looking east from Corn Street to Wine Street, Bristol, UK. The church tower visible is that of Christ Church with St Ewen, Bristol. On the far left of the image, on the north side of the road is the Register Office (previously the old Council House). In the centre of the junction can be seen the Bristol High Cross, and on the right of the image, on the south side of Wine Street is The Dutch House, damaged during the Bristol Blitz. The street scene includes a horse and cart, and a sedan chair.

The cross stood in the centre of the town, at the crossroads of its four main streets (51°27′18″N 2°35′35″W﻿ / ﻿51.4549245°N 2.5929585°W﻿ / 51.4549245; -2.5929585). The base was four octagonal piers with cusped ogee arches. The next tier contained alcoves with statues of English monarchs. The top tier was a pinnacle with the actual cross as a finial. The material was oolitic limestone but, as this was susceptible to frost damage, it was subsequently painted in colours of blue, gold, red and vermilion. The vermilion was the predominant colour of the statues, being used for their dresses, and aged well. 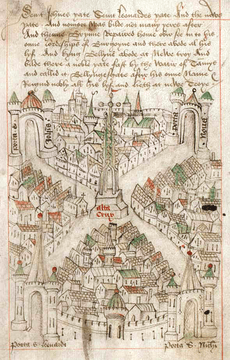 The cross is shown at the centre of Robert Ricart's map of Bristol, in the ms. The Maire of Bristowe is Kalendar. He was the common clerk of the town from 1478 to 1506, and his drawing was the first such plan of an English town.

The base of the cross displayed statues of monarchs in alcoves. In 1663, the cross was rebuilt to add a third tier for four more statues and the total complement of eight was then:

The cross's central location made it the natural place for special events. In 1399, supporters of Richard II were executed there by order of Henry Bolingbroke, after a short siege of Bristol. These included Richard's Lord High Treasurer, William le Scrope, Sir John Bussy and Sir Henry Green. The following year, Thomas le Despenser, 1st Earl of Gloucester, was executed there for his part in the Epiphany Rising against Bolinbroke who was now King Henry IV.

In 1487, it was the scene of ceremonies to greet Henry VII when he visited the city. In 1542, Bristol was proclaimed a bishopric at the cross. In 1554, Queen Mary and King Philip were there proclaimed joint sovereigns over England. In 1603, James I was proclaimed King of England by recorder George Snigge and the city dignitaries standing at the cross in their finery.

The area before the Cross was also used for public punishments, such as the city stocks or pillory.

Part of Millerd's 1728 map, showing a person in the stocks in front of the cross 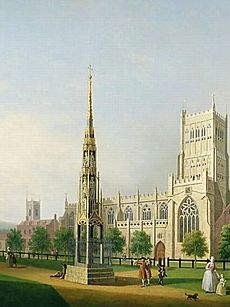 The cross in its second location beside the cathedral. This painting of it was made by Samuel Scott in about 1750.

As Bristol prospered, the cross became an obstruction to traffic. In 1733 a nearby silversmith, John Vaughan, who occupied the building later known as the Dutch House, complained that the cross threatened his life and property whenever there was a high wind, and so persuaded the magistrates to have the cross taken down. The parts were stored in the guildhall until Alderman Price and other citizens arranged for it to be erected again in spring 1736 on College Green by the cathedral.

It was there admired as a quaint antiquity but it only took thirty years for it once again to be thought an obstruction. This time, the complaints came from the visitors who had come to the spa of Hotwells. They were wont to promenade on the green in line abreast, and the cross impeded the great numbers so inclined – lines of eight or more. A fund was collected to improve the green as a promenade but this was exhausted in raising the green. The cross was again removed in August 1762 and lay disassembled in the great cloister of the cathedral.

In October 1764, Dean Cutts Barton gave the cross to Henry "the Magnificent" Hoare and the materials, except the very worn lower columns, were carted away to adorn his grand estate of Stourhead in Wiltshire. It remains there now in the care of the National Trust. 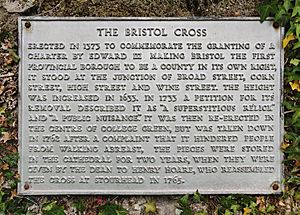 Plaque describing the history of the Bristol Cross erected in Stourhead, Wiltshire, UK. 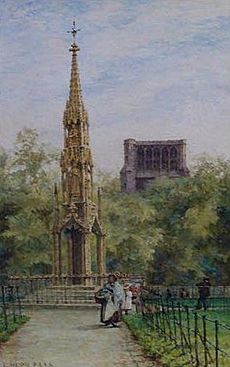 The replica of the High Cross which was reinstalled on College Green in 1851. This painting of it was made by Charles Edward Hern in 1890.

The Victorian citizens of Bristol sought to regain their cross but the original was now too fragile to be moved again. In 1851 they commissioned architect John Norton to build a replica which would again stand upon College Green. Norton inspected the original closely to copy its design and then engaged John Thomas, the celebrated mason and stone carver who had recently worked upon the new Palace of Westminster, to construct the body of the cross. The funds for the work were exhausted after only one statue had been completed—Edward III—and so the replica stood for many years with the other alcoves remaining empty. The remaining statues were eventually installed in 1889, when the cross was moved from the apex to the centre of the green to make way for the statue of Queen Victoria, the statues having been commissioned from a prolific craftsman of the region, Harry Hems.

The cross was taken down when College Green was lowered in 1950 and the upper stage of the replica cross re-erected in nearby Berkeley Square, where they were transferred in about 1956 from College Green.

A statue of King Edward III from the High Cross, exhibited at the British Library.

Four of the statues of the original cross at Stourhead were replaced by replicas in 1980, with the originals placed on indefinite loan with the Victoria and Albert Museum in London.

All content from Kiddle encyclopedia articles (including the article images and facts) can be freely used under Attribution-ShareAlike license, unless stated otherwise. Cite this article:
Bristol High Cross Facts for Kids. Kiddle Encyclopedia.