Kids Encyclopedia Facts
This page is about the street and shopping area in Bristol, England. For the Broadmead neighbourhood in British Columbia, see Broadmead, Saanich. 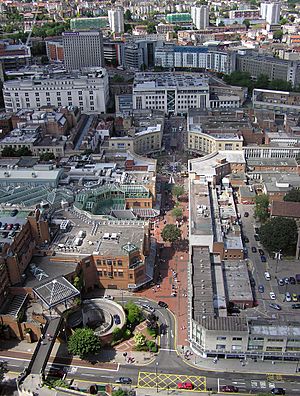 Broadmead is a street in the central area of Bristol, England, which has given its name to the principal shopping district of the city. It is part of Bristol Shopping Quarter.

The name of the street was first recorded in 1383 as Brodemede. The name either means "broad meadow" or refers to brodemedes, a type of woollen cloth woven only in Bristol.

The area lay just to the north of the town walls of the historic Bristol. In about 1227 Blackfriars was founded as a Dominican priory in the area. After the dissolution of the monasteries the site had various secular uses, and in 1749 became the location of a Quaker meeting house, now known as Quakers Friars. In 1739 John Wesley built his Methodist chapel, known as the New Room, in the street. Shops were also built in the area. In the 18th century a covered arcade was built between Horsefair and Broadmead, which still survives.

When the old shopping district of Corn Street and Wine Street was heavily damaged in the Bristol Blitz, it was decided to redevelop the Broadmead area as the main shopping district of the city. Rebuilding began in 1950. The existing street, which ran between Union Street and Merchant Street, was extended north to include the former Rosemary Street. Like most 1950s buildings in Britain, affordable and architecturally interesting utilitarian buildings form the bulk of the Broadmead area. In the 1980s some of these were destroyed to make way for the Galleries shopping centre, which is a three level covered street. Broadmead and several of the surrounding streets were pedestrianised.

Broadmead has now finished regeneration. The shopping area has been extended over the central ring road to produce a new shopping centre, Cabot Circus, which opened in September 2008. This area had been named Merchants Quarter but in April 2006 the name was abandoned after a campaign claiming the name was offensive because it was the Bristol Merchant Venturers who dealt in the trade of African slaves.

To the northwest is St James' Park.

Broadmead is served by various bus services and is immediately south of Bristol bus station. Bristol Temple Meads station is about half a mile south east.

All content from Kiddle encyclopedia articles (including the article images and facts) can be freely used under Attribution-ShareAlike license, unless stated otherwise. Cite this article:
Broadmead Facts for Kids. Kiddle Encyclopedia.