The Centre, Bristol facts for kids

The Centre is a partially pedestrianised public open space in the central area of Bristol, England, created by covering over the River Frome. The northern end of The Centre is a paved area circuited by Colston Avenue; the southern end is separated from this by a major road junction and is a larger paved area bounded by St Augustine's Parade to the west, Broad Quay the east, and St Augustine's Reach (part of the Floating Harbour) to the south. The Centre is managed by Bristol City Council.

The Centre is not the historic or civic centre of Bristol, nor is it the major shopping area. It is however an important local transport interchange and meeting place. Many local bus services terminate at or pass through here, and it is also served by ferry services to Hotwells and Temple Meads station, and has busy taxi ranks.

The Centre has been altered on a number of occasions, originally to ease traffic flow but latterly to try to strike a balance between its use as both public open space and an important traffic corridor. Proposals are currently being developed for another remodelling.

The Centre owes its form to the channel dug in the 1240s to provide additional quays and wharves for the burgeoning Bristol Docks.

This channel, St Augustine's Reach, became the heart of Bristol Docks. As trade flourished and ships became larger the docks expanded, but the completion of the Floating Harbour in 1809, and the building of docks at Avonmouth and Portishead made the wharves at the northern end of St Augustine's Reach increasingly marginal.

The northern end of St Augustine's Reach was narrower and accessed by opening The Drawbridge, which crossed the docks at the end of Clare Street (where present-day Baldwin Street was built in 1881). The Drawbridge was rebuilt for the fourth and final time in 1868, but by 1893 when it was replaced by a fixed structure it had been a source of "great congestion" to traffic (including the new trams) for many years, often being left open for twenty minutes while ships were roped up.

In 1892 The Drawbridge was replaced by the elegant stone St Augustine's Bridge; at the same time the docks to the north were infilled. The new area, which was called Magpie Park, was enclosed by Colston Avenue. It was named after the The Bristol Magpie newspaper, whose offices were located on the western side of Colston Avenue. The Bristol Industrial and Fine Arts Exhibition was held here in 1893; a popular attraction which saw 500,000 attendees and raised £2200 for charity.

This is now the site of Bristol's Cenotaph. Unveiled in 1932, The Cenotaph continues to be the focus of local remembrance.

During the 1890s Bristol's tramway system was expanded and electrified. In 1895 the Bristol Tramways and Carriage Company (BT&CC) moved their head office to premises at 1–3 St Augustine's Parade (where they remained until 1970). The need for a central interchange was recognised and to this end a large triangular traffic island, later nicknamed 'Skivvy's Island' because of its use by domestic servants, was built between the BT&CC offices and St Augustine's Bridge. The Tramways Centre became the most important of the BT&CC's three central termini, serving more routes than the others at Bristol Bridge and Old Market. It was the terminus for trams from the north and east of the city, and trams from Hotwells to Temple Meads and Brislington also stopped here. Passengers could straightforwardly alight from one tram and board another to continue their journey without the need to cross roads. A large three-faced ornamental clock was fixed high on the Tramways offices, and 'under the clock on The Centre' became a popular meeting place.

J.B Priestley visited Bristol in 1933, and described The Centre as 'a place where trams and coastal steamers seemed in danger of collision'.

In 1938 construction started on a culvert covering the area between St Augustine's Bridge and the southern end of Broad Quay. This created a route for the Inner Circuit Road, which had already bisected Queen Square, to continue northwards. Construction continued despite the outbreak of war. A large elongated roundabout was formed, with the central space initially being used as a car park. The Tramways Centre island was reshaped, and was no longer used as a transport interchange.

After the war the central space was planted with lawns, ornamental borders and golden Irish yews and became known as the Centre Gardens. 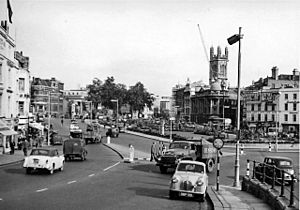 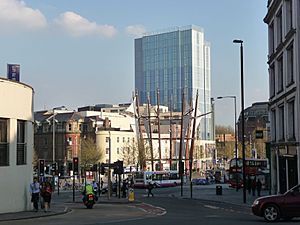 The sail structure, removed in 2009

It had been recognised since the 1960s that the southern half of the Inner Circuit Road had badly impacted the amenity of Queen Square and The Centre, and by the 1990s tentative steps were being taken towards downgrading this part of the road and transferring traffic along less sensitive routes. By the mid-1990s, the road across Queen Square had been closed and plans were being developed to rebalance The Centre in favour of pedestrians and public transport.

Bristol City Council launched a consultation exercise in 1996, in which the public were asked to choose between a 'Dock Option' (reopening the old harbour as far as St Augustine's Bridge) and a cheaper 'Promenade Option'. Both options involved closing the road across Quay Head; the Promenade Option used the new space to create a larger pedestrianised area in place of the Centre Gardens, with fountains, a cascade leading down to the waterside, and a sail structure to evoke Bristol's maritime past. The remaining road space in both options would be designed to give greater priority to public transport.

The Council decided to build the 'Promenade Option'. This soon came under criticism for its poor safety, particularly after a number of pedestrians were injured by vehicles and at least two people struck by buses and killed. The new design was also criticised for its traffic noise and fumes, "dribbling" fountains, poor traffic flow, poor cycling infrastructure, and delays to public transport. Few were happy with the new design, and many were disappointed that the 'Dock Option' had not been pursued.

The area around the pedestrian crossing at the Baldwin Street end of Broad Quay was altered in 2003 after the Bristol Coroner called for improvements.

Despite remedial work in 2007, the sail structure was found to be unsafe and removed in 2009.

In 2011 plans were again being developed for major changes to The Centre. These plans include the possibility of prohibiting private vehicles from crossing The Centre on the east-west axis, as mooted in the 1996 consultation. 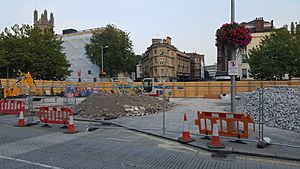 Work began in September 2015 on an £8 million project to change the layout of The Centre once more, this time to accommodate the MetroBus bus rapid transit scheme.

As well as the Cenotaph, Magpie Park has statues of Edmund Burke (1894) and Edward Colston (1895). St Mary on the Quay stands on Colston Avenue to the west of the park, and St Stephen's Church stands nearby to the east.

The southern end of The Centre (the Centre Promenade) has a lead statue of Neptune, moved to The Centre from Temple Street in 1949, and a modern water feature with fountains. Another water feature, this one stepped, leads down to a ferry landing stage at the current head of St Augustine's Reach. There is a busy taxi rank opposite the end of Baldwin Street.

On Broad Quay, the former head office tower of the Bristol and West Building Society has recently been refurbished as a hotel and serviced flats.

All content from Kiddle encyclopedia articles (including the article images and facts) can be freely used under Attribution-ShareAlike license, unless stated otherwise. Cite this article:
The Centre, Bristol Facts for Kids. Kiddle Encyclopedia.