Queen Square is a 2.4 hectares (5.9 acres) garden square in the centre of Bristol, England. It was originally a fashionable residential address, but now most of the buildings are in office use.

The site on which the Square was built lay outside Bristol's city walls and was known as the Town Marsh. The Square was planned in 1699 and building finished in 1727. It was named in honour of Queen Anne. The north side and much of the west were destroyed in the Bristol Riots of 1831 and rebuilt. Many of the buildings now have listed building status.

In 1937 the Inner Circuit Road was driven diagonally across the Square but in 2000 it was removed and the open space restored. 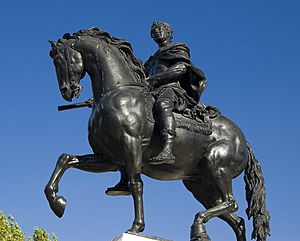 In the centre of the Square is an idealised equestrian statue of William III by John Michael Rysbrack, cast in 1733 and erected in 1736 to signify the city's loyalty. The brass statue is on a Portland ashlar pedestal with a moulded plinth and cornice and is a grade I listed building. 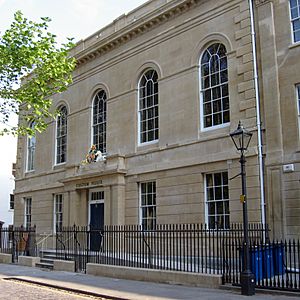 The east side contains some 20th-century buildings and the Port Authority Office (1889) by William Venn Gough. The Sailors Refuge which makes up nos 27–29 dates from 1709–11 and is II* listed.

The south side contains varied 18th century buildings, which are similar to those nearby in Queen Charlotte Street and King Street. Two are by R.S. Pope. The west side was rebuilt in the 1830s after the riot, largely by Henry Rumley, some of which are still private houses but many are offices. 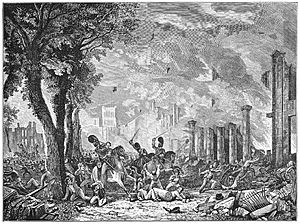 The 1831 Riot in a nineteenth-century engraving

The Bristol Riots of 1831 took place after the House of Lords rejected the second Reform Bill, which aimed to get rid of some of the rotten boroughs and give Britain's fast growing industrial towns such as Bristol, Manchester, Birmingham, Bradford and Leeds, greater representation in the House of Commons. Bristol had been represented in the House of Commons since 1295, however by 1830 only 6,000 of the 104,000 population had the vote.

The local magistrate Sir Charles Wetherell, a strong opponent of the Bill, visited Bristol to open the new Assize Courts, on 29 October. He threatened to imprison participants in a disturbance going on outside, and an angry mob chased him to the Mansion House in Queen Square. The magistrate escaped in disguise but the mayor and officials were besieged in the Mansion-house.

The rioters numbered about 500 or 600 young men and continued for three days, during which the palace of the Bishop of Bristol, the mansion of the Mayor of Bristol, and private homes and property were looted and destroyed, along with demolition of much of the gaol. Work on the Clifton Suspension Bridge was halted and Isambard Kingdom Brunel himself was sworn in as a special constable.

Lieutenant-Colonel Thomas Brereton of the Dragoons led a charge with drawn swords through the mob in Queen Square. Hundreds were killed and wounded and the mob dispersed. Brereton was later court-martialled for leniency because he had refused to open fire on the crowds, but shot himself before the conclusion of his trial. About 100 people involved were tried in January 1832 by Chief Justice Tindal.

Four men were hanged despite a petition of 10,000 Bristolian signatures, which was given to King William IV. 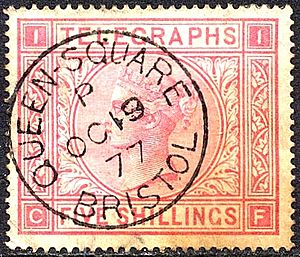 A telegraph stamp used at the telegraph office in Queen Square in 1877.

In 1937 Bristol Corporation approved the construction of a dual carriageway road diagonally across the Square, from the north-west to the south-east corner. This formed part of the Inner Circuit Road, connecting Redcliffe Way with The Centre, and involved the demolition of property in both corners of the Square and the re-alignment of the Rysbrack statue.

By 1966 the Corporation were looking at the possibility of reducing the flow of traffic through the Square by changing the route of the Inner Circuit Road to pass along The Grove and thence across the mouth of St Augustine's Reach. They even considered it possible that the road across Queen Square might eventually be closed if circumstances permitted. By the 1980s it was recognised that the dual carriageway was a "massive intrusion" on the amenity of the Square, and plans were made to "put things right".

In 1992 the dual carriageway was closed to through traffic for an initial six-month trial period. It never reopened. Buses continued to pass around the Square, however, until they were eventually diverted via The Grove and Prince Street.

The Square has now been restored to a very high standard. The railings and forecourts of the surrounding buildings have been reinstated, and the central open space with its promenades and equestrian statue restored to their former grandeur. The restoration is recognised as a major success. To commemorate the 2000 Millennium, a circular carved stone inscription was laid on the ground around the Rysbrach statue, but it has since become badly damaged.

The Square is often used for public events, mostly in the summer months, although the east side and south side are prone to flooding after heavy rainfall.

All content from Kiddle encyclopedia articles (including the article images and facts) can be freely used under Attribution-ShareAlike license, unless stated otherwise. Cite this article:
Queen Square, Bristol Facts for Kids. Kiddle Encyclopedia.