The statue of Edward Colston is a bronze statue of Bristol-born merchant Edward Colston (1636–1721), which was originally erected in The Centre in Bristol, England. It was created in 1895 by the Irish sculptor John Cassidy and erected on a plinth of Portland stone. It was designated a Grade II listed structure in 1977.

The statue has been subject to increasing controversy beginning in the 1990s, when Colston's prior reputation as a philanthropist came under scrutiny due to his involvement in the Atlantic slave trade. An effort began in 2018 to reword the plaque to include details on Colston's role in the slave trade, however a new wording was not agreed upon. On 7 June 2020, the statue was toppled, defaced, and pushed into Bristol Harbour during the George Floyd protests related to the Black Lives Matter movement. The plinth was also covered in graffiti, but remains in place. The statue was recovered from the harbour and put into safe storage by Bristol City Council on 11 June. 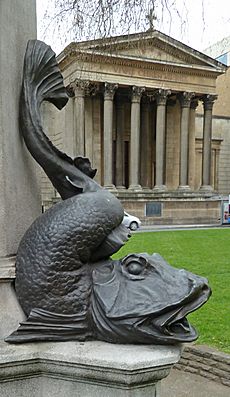 Detail of one of the dolphins

The monument originally consisted of an 8 ft 8 in (2.64 m) bronze statue of Edward Colston (1636–1721) set on top of a 10 ft 6 in (3.20 m) plinth. The statue depicts Colston in a flowing wig, velvet coat, satin waistcoat, and knee-breeches as was typical in his day. The plinth is made of Portland stone and adorned with bronze plaques and, in each corner, a figure of a dolphin. Of the four plaques—​one on each face of the plinth—​three are relief sculptures in an Art Nouveau style: two of these depict scenes from Colston's life and the third exhibits a maritime fantasy. The plaque on the south face bears the words "Erected by citizens of Bristol as a memorial of one of the most virtuous and wise sons of their city AD 1895" and "John Cassidy fecit" (John Cassidy made this).

Colston was a Bristol-born merchant who made some of his fortune from the slave trade, particularly between 1680 and 1692. He was an active member of the Royal African Company, and was briefly deputy governor in 1689–90. During his tenure, the Company transported an estimated 84,000 slaves from West Africa to the Americas. Colston used his wealth to provide financial support to almshouses, hospitals, schools, workhouses and churches throughout England, particularly in his home city of Bristol; he represented the Bristol constituency as its Member of Parliament from 1710 to 1713. He left £71,000 to charities after his death, as well as £100,000 to members of his family. In the 19th century he was seen as a philanthropist. The fact that much of his fortune was made in the slave trade was largely ignored until the 1990s.

The statue, designed by Irish sculptor John Cassidy, was erected in the area now known as The Centre in 1895 to commemorate Colston's philanthropy. It was proposed in October 1893 by James Arrowsmith, the president of the Anchor Society; this, in March 1894, led to a committee being appointed to raise a fund. Two appeals to Colston-related charitable bodies raised £407 towards the cost of the statue. Further funds, to a total of £650, were raised through public appeals after the unveiling, including a contribution from the Society of Merchant Venturers. 23 models from sculptors were proposed to the committee, from which Cassidy's was selected. The statue was unveiled by the mayor, Howell Davies, and the bishop of Bristol, Charles Ellicott, on 13 November 1895, a date which had been referred to as Colston Day in the city.

On 4 March 1977, it was designated as a Grade II listed structure. Historic England described the statue as being "handsome" and that "the resulting contrast of styles is handled with confidence". They also note that the statue offers good group value with other memorials, including a statue of Edmund Burke, the Cenotaph, and a drinking fountain commemorating the Industrial and Fine Art Exhibition of 1893. 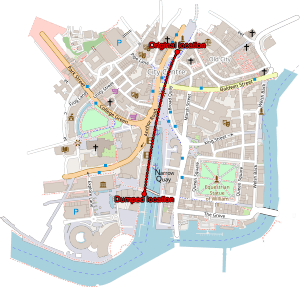 Original location of the statue, and site of its dumping in the Harbour

On 7 June 2020, during the global protests following the killing of George Floyd in the United States, the statue was pulled down by demonstrators who then jumped on it. They daubed it in red and blue paint, and one protester placed his knee on the statue's neck to allude to Floyd's death under a knee of a white policeman. The statue was then rolled down Anchor Road and pushed into Bristol Harbour.

Superintendent Andy Bennett of Avon and Somerset Police stated that they had made a "tactical decision" not to intervene and had allowed the statue to be toppled, citing a concern that stopping the act could have led to further violence and a riot. They also stated that the act was criminal damage and confirmed that there would be an investigation to identify those involved, adding that they were in the process of collating footage of the incident.

On 7 June, the Home Secretary, Priti Patel, called the toppling "utterly disgraceful", "completely unacceptable", and "sheer vandalism". She added, "it speaks to the acts of public disorder that have become a distraction from the cause people are protesting about." The Mayor of Bristol, Marvin Rees, said those comments showed an "absolute lack of understanding".

On 8 June Rees said that the statue was an affront, and he felt no "sense of loss [at its removal]," but that the statue would be retrieved and it was "highly likely that the Colston statue will end up in one of our museums." The historian and television presenter David Olusoga commented that the statue should have been taken down earlier, saying: "Statues are about saying 'this was a great man who did great things'. That is not true, he [Colston] was a slave trader and a murderer."

Police Superintendent Andy Bennett also stated he understood that Colston was "a historical figure that's caused the black community quite a lot of angst over the last couple of years", adding: "Whilst I am disappointed that people would damage one of our statues, I do understand why it's happened, it's very symbolic." 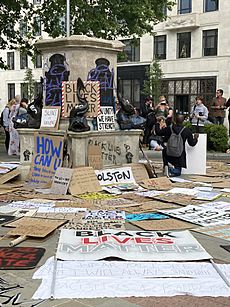 Rees made a statement suggesting that "it's important to listen to those who found the statue to represent an affront to humanity and make the legacy of today about the future of our city, tackling racism and inequality. I call on everyone to challenge racism and inequality in every corner of our city and wherever we see it." In an interview with Krishnan Guru-Murthy, he said, "We have a statue of someone who made their money by throwing our people into water ... and now he's on the bottom of the water." In a separate interview, Rees commented that the statue would probably be retrieved from the harbour "at some point", and could end up in a city museum. Rees confirmed that placards left by protesters will be put on display at the M Shed museum in Bristol.

A spokesperson for Boris Johnson, the Prime Minister, said that he "absolutely understands the strength of feeling" but insisted that the democratic process should have been followed, and that police should hold responsible those involved in the criminal act.

Labour leader Keir Starmer said while the manner in which the statue had been pulled down was "completely wrong", it should have been removed "a long, long time ago". He added "you can't, in 21st Century Britain, have a slaver on a statue. That statue should have been brought down properly, with consent, and put in a museum."

The Society of Merchant Venturers, in a statement on 12 June, said that "the fact that it [the statue] has gone is right for Bristol. To build a city where racism and inequality no longer exist, we must start by acknowledging Bristol's dark past and removing statues, portraits and names that memorialise a man who benefitted from trading in human lives." 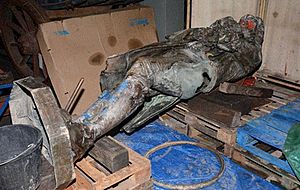 Statue in storage after retrieval

At 5 am on 11 June 2020, the statue was retrieved from Bristol Harbour by Bristol City Council. The statue was found filled with mud and sediments from the harbour floor. The council said the statue was structurally stable, although it had lost one of its coattails, the walking stick, and faced damage to its left side and to the foot. They stated they had cleaned the statue to prevent corrosion, and that they plan to exhibit it in a museum without removing the graffiti and ropes placed on it by the protesters. Whilst cleaning mud from the statue, M Shed discovered an 1895 issue of Tit-Bits magazine containing a handwritten date, 26 October 1895, and the names of those who originally fitted the statue.

The day after the toppling, the police announced that they identified 17 people in connection with the incident, but had not yet made any arrests. On 22 June 2020 the police released images of people connected to the incident, and asked the public for help identifying the individuals. On 1 July, an unnamed 24-year-old man was arrested on suspicion of criminal damage to the statue. and was bailed under police investigation. In September 2020, Avon and Somerset Police said that files on four people suspected of criminal damage had been passed to the Crown Prosecution Service to decide if charges should be brought. A further five people had been offered restorative justice, such as a fine and community service. By 1 October 2020, a total of six people had accepted Conditional Cautions relating to the events of 7 June.

After the toppling of Colston's statue, a similar monument to Robert Milligan, the slave trader who was largely responsible for the construction of the West India Docks, was removed by the authorities after opposition in east London by the Tower Hamlets council on 9 June 2020. On the same day, the Mayor of London, Sadiq Khan called for London statues and street names with links to slavery to be removed or renamed. Khan set up the Commission for Diversity in the Public Realm to review London's landmarks.

In what a local councillor believed was retaliation, the headstone and footstone for the enslaved man Scipio Africanus were vandalised in the churchyard of St Mary's Church, Henbury, on 17 June. The attacker broke one of the stones in two and scrawled a warning to "put Colston's statue back or things will really heat up."

After the statue was removed, a petition began to have a statue of Paul Stephenson erected in its place. The former Bristol youth worker is a black man who was instrumental in the 1963 Bristol Bus Boycott, inspired by the US Montgomery bus boycott, which brought an end to a then-legal employment colour ban in Bristol bus companies.

While the plinth has remained empty, a number of unofficial statues have been put on the plinth:

On 11 July 2020, a mannequin dressed as disgraced television presenter Jimmy Savile appeared on the plinth, holding a placard reading ""None of them stopped me, and your licence paid for it". The mannequin was on the plinth for about an hour, before being removed.

In the early morning of 15 July 2020, a statue by Marc Quinn was placed the empty plinth without permission from the authorities. The statue, entitled A Surge of Power (Jen Reid) 2020 depicts a Black Lives Matter protester with a raised fist. Quinn described it as a "new temporary, public installation". Bristol City Council removed the statue on the morning of 16 July, and said it would be held in their museum "for the artist to collect or donate to our collection".

On 2 December 2020, a figurine of Darth Vader appeared on the plinth, in what was seen as a tribute to the actor Dave Prowse, who was born in Bristol and died on 29 November 2020.

All content from Kiddle encyclopedia articles (including the article images and facts) can be freely used under Attribution-ShareAlike license, unless stated otherwise. Cite this article:
Statue of Edward Colston Facts for Kids. Kiddle Encyclopedia.