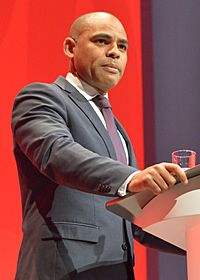 Marvin Johnathan Rees (born April 1972) is a British politician. Since May 2016, he has served as mayor of Bristol. He is a member of the Labour Party.

Rees grew up in Bristol. He is mixed race. His mother is British, and his father is Jamaican. He is married and has three children.

All content from Kiddle encyclopedia articles (including the article images and facts) can be freely used under Attribution-ShareAlike license, unless stated otherwise. Cite this article:
Marvin Rees Facts for Kids. Kiddle Encyclopedia.