Easton is an inner city area of the city of Bristol in the United Kingdom. Informally the area is considered to stretch east of Bristol city centre and the M32 motorway, centred on Lawrence Hill. Its southern and eastern borders are less defined, merging into St Philip's Marsh and Eastville. The area includes the Lawrence Hill and Barton Hill estates.

In administrative terms, Easton comprises .the electoral wards of Easton and part of Lawrence Hill. It is located within the Bristol West constituency. The electoral ward of Easton includes parts of the localities of Netham and Whitehall, and a large part of Greenbank. The Bristol & Bath Railway Path passes through the ward.

In the medieval period Easton lay within the Royal Forest of Kingswood in the manor of Barton Regis. The name Easton is probably derived from the Anglo-Saxon East Tun meaning East Farm. The earliest documentary reference to Easton is Chester and Master's 1610 Map of Kingswood, which depicts three settlements: Upper Easton, which was centered on Easton Road, Lower Easton, which was centered on St Marks Road, and Baptist Mills, on the east bank of the River Frome.

In the post-medieval period the area became increasingly industrial with large scale extraction of coal, clay and sand occurring across the area. In the 19th century most of Easton was developed for housing.

In the late 1960s and 70s large areas of Easton were demolished to make way for new roads (A4320 Easton Way and the M32 Motorway) and housing estates.

The Census 2011 reported that Easton has a higher proportion of under 10s and people in the 25-44 age group than the England and Wales average, but fewer 10 to 15 year olds and people aged over 45.

St Marks Road in northern Easton is a shopping street noted for its exuberant decoration and a number of shops with sculpted shop signs hanging above their doors. There are a number of Moroccan and Indian subcontinent restaurants and shops specialising in organic and ethnic foods, further reinforcing the area's reputation as 'alternative'.

The name Banksy is synonymous with Easton. There are several Banksy artworks in Easton although the council inadvertently painted over one and another has had a tin of paint thrown over it. This was possibly done in response to the house that the art was attached to being sold as a piece of Banksy graffiti with a house thrown in for free.

Easton has two railway stations, Lawrence Hill and Stapleton Road, which are served by trains on the Severn Beach Line plus services to and from Gloucester and South Wales. The main line to South Wales, the Midlands, Scotland and London also passes through Lawrence Hill and Stapleton Road, branching away from the Severn Beach line just north of Stapleton Road Station. The M32 motorway marks the border of Easton to the north. The A4032 dual carriageway cuts the area in two. 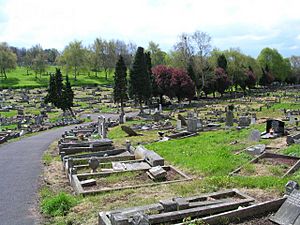 All content from Kiddle encyclopedia articles (including the article images and facts) can be freely used under Attribution-ShareAlike license, unless stated otherwise. Cite this article:
Easton, Bristol Facts for Kids. Kiddle Encyclopedia.